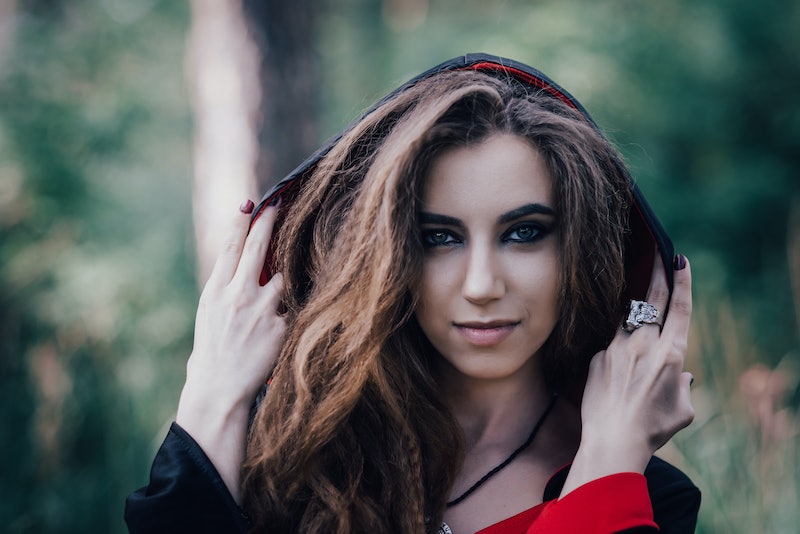 Have you felt an unmistakably spooky vibe in the air, sending shivers down your spine? No, I'm not talking about Halloween — I'm talking about Mercury retrograde fall 2019, which ominously begins its reign of terror on Oct. 31, aka Halloween. Now that's scary.

Every few months, like clockwork, Mercury (planet of intellect, communication, technology, and timing) appears to move backward on its elliptical orbit for a period of approximately three weeks. It's this period that astrologers refer to as a "retrograde" — and in astrology, when a planet retrogrades, all the parts of our lives that the planet governs turn upside down until the planet goes direct again (or starts moving forward). It's not meant to ruin our lives (although sometimes it has that effect) — it's simply meant to help us slow down and take some time to reflect upon, review, and revise our current paths.

This year's next (and final) Mercury retrograde period begins on Halloween, and it'll be backspinning through the dark, controlled, and emotional sign of Scorpio. "The messenger planet goes to greater lengths to connect the dots when it’s in the detective sign of Scorpio, and by the end of its retrograde, no stone will be unturned in our efforts to get to the core of a deeper emotional truth," explains astrologer Steph Koyfman of The Daily Hunch, who spoke with Bustle.

So no, folks, it's not a coincidence that this transit begins on the one day of the year known for being frightful — it's going to be a rocky road on the astrology front. "Halloween doesn’t just last one day this year —the shenanigans are gonna be that intense," warns astrologer Danny Larkin, who spoke with Bustle about the backspin. "Brace yourself. Mercury reverses courses on Halloween, which is gonna make for a sloppy party ... if something seems to good to be true this month, it probably is." We'll want to keep our wits about us.

Bustle chatted with a group of professional astrologers to get their input on how to prepare for Mercury retrograde fall 2019 in Scorpio so that we can make the most of it — and come out unscathed. Read on.

If You Need To Plan Or Start Something, Do It Now

Starting something new — whether it's planning a trip, seeking a new job, or mapping out a new creative project — is going to feel like trying to swim out quicksand during Mercury Rx, so start thinking of what you need to put in motion before it starts. "Even if you’re not ready to commit to making plans, put out feelers during the shadow period to spin the Mercury Rx in your favor," explains Annabel Gat, senior astrologer for Astro Guide and author of The Astrology of Love & Sex, who spoke with Bustle. "[I]t’s better to revisit something than start something during this time." Lay out the foundations for your upcoming plans now, before the retrograde goes into full swing.

This particular Mercury Rx is not the time to take any risks with how you handle money, as Scorpio deals with themes like debts and taxes. "Mercury retrograde in Scorpio will force us all to re-examine our finances and how we handle money," explains astrologer Lisa Stardust, who spoke with Bustle about this transit. "Don’t make any investments or take financial risks. Try reaching out to a financial advisor or obtaining information on how to make conscious decisions on how to save money." Get your financial affairs in order before the retrograde hits in order to avoid a mess. "After all, Scorpio is the sign of sex, death, and taxes," adds Stardust. "[U]se this cosmic energy to your advantage."

Check In With Yourself Emotionally — And Be Honest

With this retrograde taking place in watery, emotionally-driven Scorpio, our emotions and secrets are about to be laid out on an operating table and dissected — so it's a good idea to do some self-relflection before the retrograde begins, so you know what to expect, in case it's your bag of of secrets on display. "Mercury Rx in Scorpio is a time to re-evaluate your emotional world, so don’t be afraid to look under the hood," advises astrologer Aliza Kelly, author and host of the Stars Like Us podcast. who spoke with Bustle. "Choices you made in the past will rise to the surface during this time." Prepare yourself to answer for your actions, and think through things honestly.

Wrap Up Any Lingering Issues, Projects, Or Conversations

"Mercury retrograde may not be the most ideal time to start a new job or relationship, but it is a great time to tie up any loose ends," advises astrologer Maia Orion, who spoke exclusively with Bustle. "Are there unfinished projects you’ve wanted to dig deep with and finally complete? Or perhaps a past miscommunication with a friend has been on your mind?" Ask yourself what's been lingering in your heart and on your mind. It can be hard to find momentum to get things done during a retrograde, so tie up loose ends now, in preparation for what's to come. "Allow yourself to find both the time and the headspace to finally bring that project to the finish line," Orion advises.

Think Hard About How You Handle Conflict

Our private lives are at the forefront of our minds this retrograde period, and if things get revealed that we're not prepared for, we might feel the urge to lash out — but we should think hard about the nature of our defenses. "This fall's Mercury Rx, entirely within the sign of Scorpio, highlights in particular the ways we tip the scales or pull the puppet strings — [so] reconsider how you fight, and why," advises Lexi Ferguson, astrologer for Astro Guide and Tarot reader at House Of Yes, who spoke with Bustle. "Not every victory requires collateral damage, and conversely, not every escape act can be done without a trace."

Secrets Are Coming To The Surface, So Don't Push Your Luck

If there are lies and secrets bubbling beneath the surface, it's likely that they're going to come up for air during this retrograde — you're likely to see other people's true colors, and show your own, too. "It's going to come to light on you that people are pretending to be things they aren’t. The costumes and masks are going to come off and secrets will be revealed," explains Larkin to Bustle. But it works both ways: "If you’ve lied to people, it may come back to bite you — so you might not want to push it this October as we enter the shadow period."

Find A Trusted Emotional Outlet To Help Clear Your Head

As mentioned, there are many secrets to be revealed during this retrograde, and it's going to be extra important that we're able to process our feelings around things in a healthy, clear-minded way. "Mercury will station retrograde in a conjunction with Venus, so you might have an easier time uncovering the truth with the help (or listening ear) of a trusted confidant," explains Koyfman to Bustle. "Don’t spin in mental circles — air out your thoughts with a therapist or someone you can be vulnerable with." Start thinking about who in your life you can be honest and vulnerable with, and seek them out.