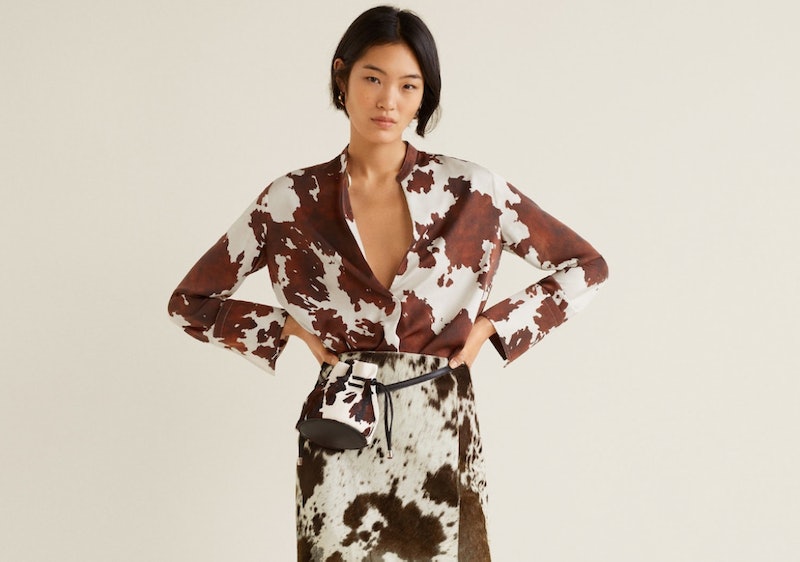 Animal print has been a firm fixture in the fashion industry for decades. Usually restricted to leopard or cheetah (who can honestly tell the difference?), now a whole host of other creatures are getting their turn in the spotlight. Granted the vast majority are considered wild — think zebra, snake, and tiger — but one is a little closer to home. I'm talking about the cow. And thanks to endorsements from both designers and celebrities, wearing cow print is now a bonafide trend.

The comeback of the cow was first noticed on the catwalk. In September, Riccardo Tisci's Burberry debut showcased several prints. Deer and leopard motifs sauntered alongside the all-important cow pattern. Even a T-shirt was printed with the word "COW". Victoria Beckham's newly released collection is full of brown-and-white cow-inspired looks. The designer herself recently called it her "favourite print".

On the A-list front, both Meghan Markle and Kylie Jenner have been spotted wearing the farmyard pattern. The latter donned a cow print swimsuit on a luxurious holiday while the Duchess of Sussex chose subtle cow print heels by Gianvito Rossi for a charity visit earlier this month.

The high street may only just be catching onto the trend, but prepare for an onslaught of cow-inspired pieces in the next few months. If you want to get ahead of the crowd, here's a rundown of the best cow print items you can pick up right now.