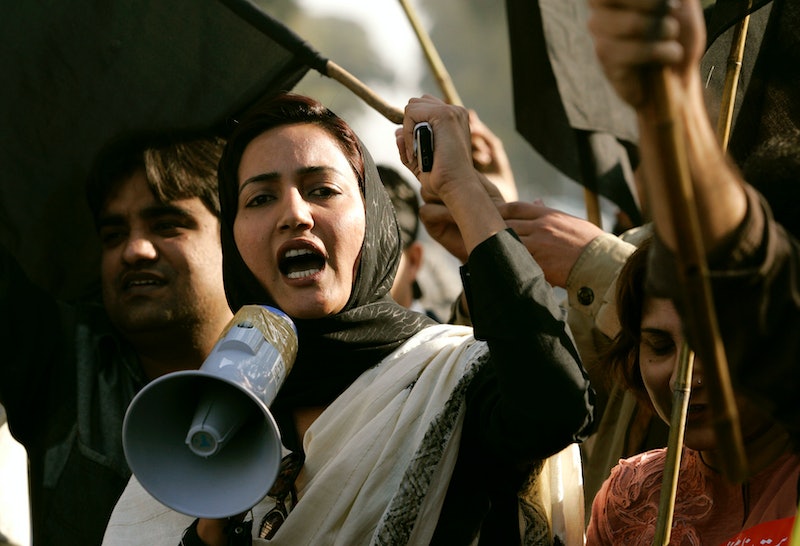 April 4 is Equal Pay Day, and as such, media focus on the wage gap between American men and women will intensify. Despite the attempts to raise awareness about the continued existence of the wage gap, however, people will all too often dismiss them, or in some frustrating cases try to argue about it with you. There are tons of arguments about the pay gap that people may make — but luckily, you can pretty easily argue against each one.

Refuting the existence of the gender pay gap seems to be a favorite pastime of men's rights activists, conservative think tanks, and random Twitter users alike. To them, exposing the "feminist conspiracy" behind Equal Pay Day and the push to close the gender wage gap seems to be very important, and they love to argue about it. Their reasons for doing so are as individual as they are, and given that there are women who promote this belief, it's overly simplistic to just blame it on sexism.

Luckily, we've got you covered on eight of the most common false arguments against the pay gap and tips on how to debunk each one when and if you encounter them on this otherwise-excellent awareness-raising day.

This type of derailing comment is used to dismiss your argument on the basis of a different but related fact. Women are considered a "protected class" under the Equal Employment Opportunity Commission, but are still not in the U.S. Constitution. It also doesn't matter if women are protected under the EEO — the wage gap persists in spite of it.

Many surface-level arguments in favor of pay equality state that women make 79 cents for each dollar a man makes. That leaves out an entirely different factor that's divided feminists — that white women earn 79 cents for each dollar a white man makes, but that the statistics are much worse for women of color. Rebutting this is easy in theory, but can get difficult if you come up against someone who refuses to see race. Remind them that things are indeed statistically worse for women of color, and that brown and Black women experience the worst end of this.

It's amazing that arguments by primarily white feminists which attempt to pit Black men against white women still exist with all we know now about the historical use of white womanhood in racist ideology. All the same, this argument — whose basis I haven't been able to identify — lives on. The rebuttal to this argument is based in Pew research which shows that white women continue to make slightly more than Black men, and that both still make less than white men.

This infuriating argument seems to get at the inherent sexism in arguments against the gender pay gap. By this reasoning, women simply want different things out of life than men — we prefer to have and raise kids rather than have successful careers. There's so much wrong with that stance that it's almost absurd. Anyone who's ever known a non-maternal woman knows that clearly, not all women want kids, and that wanting to have a family isn't the sole desire of women. You can respond to that argument by reiterating that having kids isn't women's work, that not all women want families, and that having kids shouldn't mean someone makes less than someone else on the basis of gender.

5. "A Female CEO Makes More Than A Male Construction Worker."

I've heard this derailing attempt from single-issue activists who only focus on classism without taking race or gender into account. To this type of person, the wage gap simply couldn't be real because there are men out there who make less than female CEOs. That's like saying someone slowly suffocating doesn't have it as bad as someone else whose house is on fire.

The rebuttal to this derailment is also based in research — yes, working-class and blue-collar jobs do obviously pay much less than white-collar jobs and especially executive positions, but women in blue-collar communities continue to experience pay gaps in comparison to the men who are also in their communities. Classism certainly plays a role, but the existence of female CEOs doesn't erase the existence of the gender pay gap.

This lovely derailment is complicated to respond to because there is evidence to suggest that some women do indeed choose lower-paying fields than men. This doesn't negate the fact that women can and do still make less in the same fields as men — including those "low-paying fields" that women supposedly choose at higher rates than their male counterparts. You can respond to this by reminding the person you're speaking to that women often earn less in the same jobs as men regardless of field.

7. "Young Women Excel And Even Make More Than Men In Some Fields."

Here we have a rebuttal to the existence of the gender pay gap that appears to be based in the "men are oppressed by women" rhetoric of "men's rights activists." This one is often linked to a claim made by the conservative pundit Genevieve Wood who claimed that childless young women in large cities "are actually outperforming males" who have otherwise-similar lives. Politifact ruled this argument "mostly true," but a good response to it is that while young (and probably white) women without kids may be making more than their male counterparts in big cities, that doesn't change things for women of color, women with kids, rural women, or older women. These women all continue to experience the wage gap at disproportionate rates compared to young, childless white women in major metropolitan areas.

And here we have it, folks — the blatant belief behind most of the aforementioned arguments against the existence of the gender pay gap. Unfortunately, this very simplistic belief persists because people keep writing articles about why the wage gap is supposedly a myth. In recent years, proponents of this "wage gap myth" have been women, which may legitimize it in the eyes of those who just won't let this argument die.

When and if someone says this to you (and if you get into it publicly or on Facebook, they almost certainly will), direct them to the Pew report published the day before Equal Pay Day 2017. The pay gap appears to be narrowing, but it definitely still exists. Remind them again that when race is taken into account, the gap widens significantly. Be a broken record until they either give up or you get it into their heads that this gap exists and needs to be addressed for full racial and gender equality.

Like every other feminist awareness day, arguments can and will abound that aim to refute everything you believe in. Don't let it get to you — you have these eight arguments up your sleeve to prove to them that you know what you're talking about.