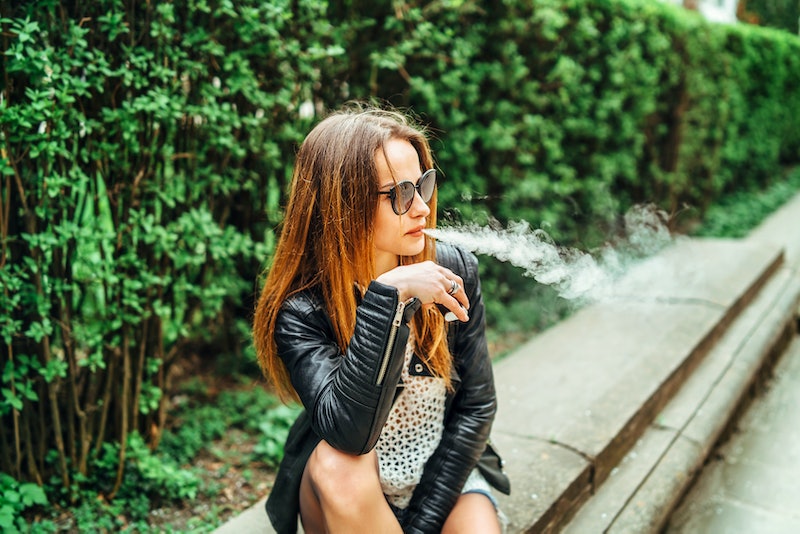 With vaping on the rise, and the current side effects of vaping still unknown, many people are left wondering what, if any, are the differences between smoking weed and vaping weed. Now that vaping has become more commonplace for smoking tobacco, some have begun to explore whether or not a vape can be used for marijuana as well. But that still leaves many with the question: is there a difference in terms of how it affects the body?

First, it's important to mention that although we know that smoking is bad for someone's health — and that cannabis smoke still does contain carcinogenic chemicals — research has found that cannabis smoke doesn't have the same negative effects as tobacco smoke when it comes to emphysema or lung cancer, although research on this is still ongoing. Additionally, there are two primary ways of vaping that currently exist: vaping ground flower (the whole cannabis plant) and vaping cannabis oil.

"In the U.S., we know relatively little about the way that cannabis consumption habits affect health, due to the Schedule I status of cannabis and lack of research that has been permitted over the years," Dr. Juli Crockett, director of compliance at MMLG, a consulting resource for cannabis licensing and compliance, tells Bustle. "So much of the body of evidence for effects is anecdotal and based on personal experience, and these testimonials are in no small part what has been pushing legislation forward in expanding access to patients and adult-use consumers, alike."

Although vaping and smoking something affect your brain and may have similar hallucinatory effects given the THC content of the marijuana, there are some differences in how they will affect a person's body overall. But it is important to note that research is still inconclusive as to whether or not vaping is the "safest" option for someone who is looking to smoke. Here are eight fascinating differences between smoking weed and vaping weed.