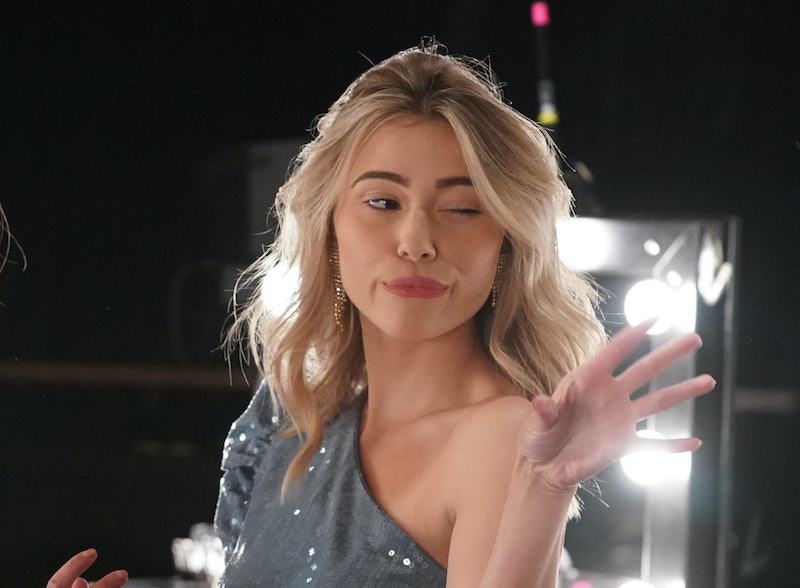 Helen of Troy may have the face that launched a thousand ships, but The Bachelor's Mykenna Dorn has the tongue that launched a thousand memes. Since Peter's season premiered in January, the 22-year-old fashion blogger has been serving more face to viewers than she has to the Bachelor himself. And while that may not be enough to land her Peter's final rose, it is enough to turn her into a series of GIFs, earn hundreds of tweets, and inspire an entire Reddit thread dedicated solely to her wild facial expressions.

Before you start to feel bad, Mykenna is very in on the joke. Ahead of the show's Feb. 3 episode, she posted four of her best ~lewks ~ to her Instagram stories, writing "Who's ready for my cringy [sic] facial expressions?" And after Shakira's tongue also went viral during the 2020 Super Bowl, Mykenna joked on her Instagram Story, "When you realize you have more in common with Shakira than just sharing the same birthday," alongside a string of tongue-sticking-out emojis. If going on a reality TV show with an overactive tongue means Mykenna got to exist in the same sentence as Shakira, honestly, who needs Peter.

We salute you, Mykenna. As tribute, here are eight GIFs to use in your Bachelor group chat.

When She Was All Of Us Watching Peter

If you need a drink just to stomach watching Peter spectacularly mishandle the women's drama, imagine being on the show.

When She Was Shook

When Her Tongue Went Viral

In the words of former Bachelor Nick Viall, this is the face you make "When you're not getting any action and just decide to make out with yourself."

When She Imitated a Frog Looking At Its Dinner

The laser focus is the scariest part.

When She Screamed The Scream Of All Screams

You can hear this in video form if you so chose, but maybe turn your volume down a little first.

When Every Fiber Of Her Being Was Disappointed

Think about how many scenarios you can use this in the group chat for.

When She Was So Over It

If her tongue had eyes, they would also be rolling.

When She Did Whatever This Was

Has anyone's tongue ever worked harder?