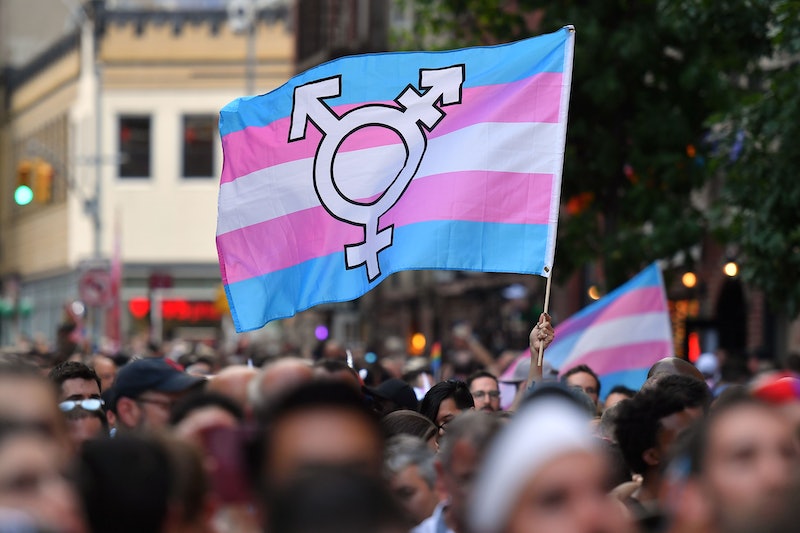 March 31 is International Transgender Day of Visibility (TDoV), a day for people around the world to celebrate the achievements of trans and nonbinary people. It’s a time to focus on the positive contributions of trans folks to society and culture, from ballroom legends like Angie Xtravaganza to superhero actor Chella Man. Statistics about transgender people show that trans visibility is crucial today and every day.

Events of the last week alone have made it abundantly clear that everyone needs to stand up for the safety, acceptance, and basic human rights of trans and nonbinary people in the United States. A 33-year-old trans woman named Lexi, who loved poetry and fashion, was murdered on March 28 in New York City, just two days after U.S. Attorney General William Barr falsely claimed that trans women are not women. CNN reports that on March 30, Idaho governor Brad Little signed two anti-trans policies, one that will ban trans girls from participating in sports and one that will block trans people in Idaho from changing the gender marker on their birth certificates, into law. Anti-trans violence like this is a direct result of trans and nonbinary people not being seen as, well, people — and with institutions like the U.S. census bureau not counting nonbinary Americans in the 2020 census, it's critical for cis people to uplift their trans and nonbinary friends.

Transgender Day of Visibility isn’t intended to be a day of mourning — Transgender Day of Remembrance, which memorializes victims of transphobic violence, is in November. It's about celebrating trans achievements and empowering trans activism, but the following statistics, which starkly reveal the struggle for basic human and civil rights that trans and nonbinary folks have to deal with every day, illustrate exactly why the fight for trans and nonbinary rights is still ongoing.

1. In The United States, 1.4 million Adults Are Transgender

According to a 2017 report by public policy research organization the Williams Institute, approximately 0.6% of U.S. adults are transgender. That may seem like a tiny percentage, but it translates to 1.4 million trans people across the United States.

Even as the rights of these 1.4 million folks are threatened across the country, a 2019 report published by the Williams Institute found that 73% of 1,000 survey respondents believe trans people should be protected from discrimination, and 71% believe that trans folks should have access to gender-affirming surgeries.

According to a 2018 report by the National Coalition of Anti-Violence Programs, 52% of anti-LGBTQ homicides in 2017 were committed against trans and gender non-conforming people, and 40% of anti-LGBTQ homicides were committed against trans women of color. The 2015 U.S. Transgender Survey found that 61% of Black trans folks have endured police mistreatment (ranging from verbal harassment to physical assault). Additionally, the Williams Institute reports that multiple studies have shown that LGBTQ youth of color are over-represented in both child welfare and juvenile justice systems due to combinations of structural racism, gender-based discrimination, and family rejection. Because trans people are targeted for violence when people assume that transphobic violence is acceptable, positive representation, visibility, and advocacy are even more important.

The 2011 National Transgender Discrimination Survey describes harassment at work as “a near universal experience” for transgender and gender non-conforming employees, with 90% of respondents reporting that they had been harassed at work or forced to take “protective actions” (like hiding their gender identity) in order to avoid harassment.

Nearly half of respondents said that they had experienced “an adverse job action” (like not getting hired or promoted, or being fired) due to their being trans or gender nonconforming. Over 25% reported losing their jobs because of their gender, with a significantly higher rate of job loss for trans people of color.

Partially as a result of these issues, a higher-than-average rate of trans people live in poverty. A 2019 report by the Williams Institute found that nearly 30% of trans folks live in poverty, compared to 16% of cisgender straight people. The 2011 National Transgender Discrimination Survey found that trans people are four times more likely than the general population to have an annual income of less than $10,000.

Trans people experience homelessness at a rate of twice the national average, and are less than half as likely to own a home as their cisgender peers. Housing discrimination is a major problem, according to the 2011 National Transgender Discrimination Survey, with 19% of trans people saying that they have been refused housing and 11% saying they’ve been evicted due to being trans or nonbinary.

This persistent financial and housing insecurity only makes trans folks more vulnerable to violence and less able to seek protection. According to the 2015 U.S. Transgender Survey, 30% of trans people have experienced homelessness at some point in their lives, yet a 2016 report by the Center for American Progress found that 21% of homeless shelters refuse to admit trans women.

5. Trans & Nonbinary People Are Less Likely To Have Access To Quality Medical Care

A 2017 health policy brief by the Williams Institute found that trans people are three times more likely than their cisgender peers to delay seeking medical attention (even for dangerous health problems) due to fear of discrimination. Nearly 100% of nonbinary people have encountered health care providers who did not provide inclusive medical services, according to a 2018 study published in the journal LGBT Health.

6. Trans People, Especially People Of Color And People With Disabilities, Are More Likely To Be Denied The Right To Vote

According to a 2020 report by the Williams Institute, almost a million trans adults are eligible to vote in the United States in 2020, but nearly 400,000 of those folks live in states that may not allow them to vote due to restrictive voter ID laws. The report found that trans people of color, people with low incomes, and trans folks with disabilities are more likely to be disenfranchised by these laws.

7. Transgender Youth Deal With A Lot of Bullying, But Supporting Their Transitions Helps A Lot

One-sixth of trans or nonbinary K-12 students said that bullying was so bad that they left school because of it. The effects of this abuse seeped into these kids’ adult lives; the study found that students who had been harassed at school were more likely to have lower income levels as adults than other students.

According to the National Transgender Discrimination Survey, 41% of trans folks have attempted suicide at some point in their lives — a percentage that is more than 25 times higher than that of the general population. Trans people who experienced housing discrimination, job discrimination, rejection by their families, bullying in school, physical violence, or sexual assault had an even higher rate of suicide attempts.

A 2019 report by the Williams Institute, however, concluded that trans people with supportive families are less much likely to have suicidal thoughts and behaviors. Among trans folks who want trans-affirming medical care, the report found that mental health improved significantly when people could access that care.

Trans folks who live in states with gender identity nondiscrimination laws are also, the study found, less likely to experience suicidal thoughts and behaviors. This aligns with the findings of a 2020 study published in The Lancet Public Health Journal, which surveyed over 22,000 trans Americans and found that those whose IDs have been updated match their gender are much less likely to experience severe mental health issues.

However, a 2018 study published in the Journal of Adolescent Health concluded that trans youth mental health improves drastically when young people hear their chosen name more often. The study analyzed the mental health of 129 trans and gender nonconforming youth across three U.S. cities and found that the more frequently others use the young folks' chosen name, the less likely trans youth are to experience depression, suicidal ideation, and suicidal behavior.

Trans children who are allowed to socially transition are no more likely to experience depression or anxiety than their cis peers, according to a 2017 study published in the Journal of the American Academy of Child and Adolescent Psychiatry. Similarly, a 2018 report by the Williams Institute found that trans college students are healthier overall when they attend schools with transgender-inclusive campus policies. According to a public policy research brief by Cornell University, 51 different peer-reviewed studies published between 1991 and 2017 concluded that access to gender-affirming care improves the quality of life and health of trans and nonbinary folks of all ages.

Even though many statistics are bleak, providing gender-affirming social, medical, and legal support to trans and nonbinary folks makes people's lives and experiences much more positive — which is exactly the point of the Trans Day Of Visibility.

This article was originally published on March 31, 2017