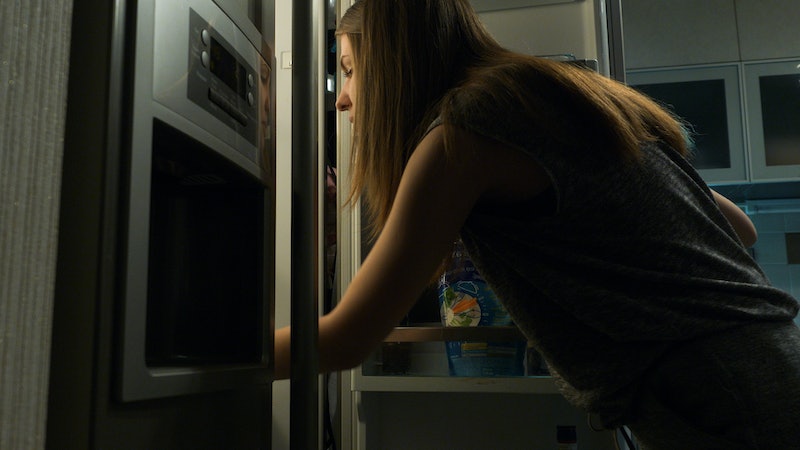 The human brain is truly a remarkable thing — and what it’s capable of doing while we’re asleep is perhaps the most remarkable thing of all. Sleep-eating, for example, can occur for a wide variety of reasons — and when it comes to the causes of sleep-eating, I’m willing to bet that there are a lot of things you don’t know about the condition.

Sleep-related eating disorder (SRED) — which is also sometimes referred to a nocturnal sleep-related eating disorder, or NSRED — isn’t terribly common; it only affects about one to three percent of the general population, according to online resource ANRED. What’s more, we haven’t been studying it for that long. The first documented report of nocturnal eating we have in the literature dates back to 1955 — and over the next several decades, only nine other reports, most of which were individual case studies, emerged. Doctors only seriously began studying it in 1985, when Mark Mahowald, MD, and Carlos Schenck, MD, began work on what would turn out to be the first major piece of research published on the condition.

Diagnosing SRED can be difficult due to the fact that, honestly, we still don’t know enough about it to have worked out a clear set of criteria. However, it’s typically characterized by episodes of eating or drinking that occur while the patient is still caught up in the sleep cycle; they may have “impaired consciousness while preparing and eating food,” according to the Mayo Clinic, and will have little to no memory of the events when they awake in the morning. Some SRED episodes might also involve the patient eating things that are not actually food. (According to Schenck and Mahowald’s research, one patient is on record as having eaten “buttered cigarettes” during an SRED episode.)

It’s worth noting, by the way, that SRED is not the same thing as night eating syndrome, or NES. According to an overview of SRED published in the journal Psychiatry in 2006, NES is classified as an eating disorder with associated initial insomnia, while SRED is classified as a sleep disorder, or parasomnia. There’s typically amnesia surrounding an episode of SRED — that is, people with it aren’t aware of what they’re doing — which isn’t the case for NES. This difference matters enormously when it comes to diagnosing and treating both conditions.

As for what causes SRED? Well, the bottom line is that we don’t really know (yet). We do, however, know about a number of things that are associated with it, which has given us clues and areas to explore as research about the condition continues. Treatment for SRED typically begins with a clinical interview, followed by a one- or two-night sleep study at a sleep facility, according to ANRED; from there, treatment will be tailored to individual patients.

Here are a few of things that we know are related in some way, shape, or form to SRED. If you think you might be experiencing the condition, make an appointment with your doctor, STAT — they should be able to refer you to a sleep specialist.