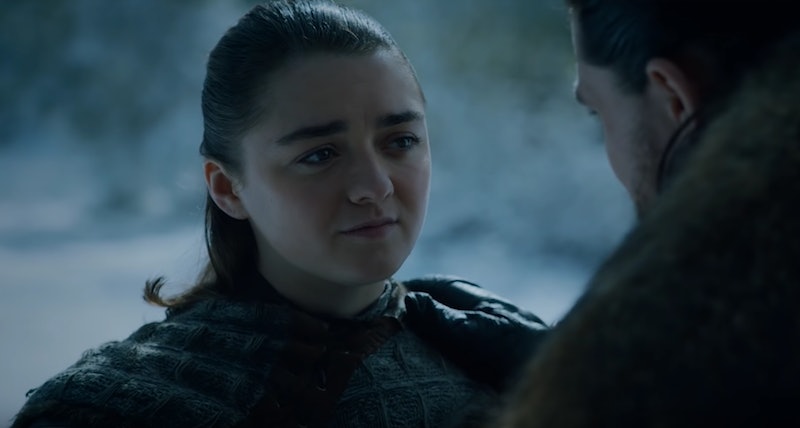 Fans who have watched Arya Stark, as played by Maisie Williams, grow up on Game of Thrones for the past decade probably could have guessed that she would play an essential role in the series' climactic culmination based on any of Game of Thrones' past seasons. Over the years, the small-but-mighty Stark proved that she's not only a survivor, but a cold blooded killer. And while these Arya theories going into Season 8 all vary in details, overall they all agree that Arya will likely kick some major butt in this final season.

Season 7 of Game of Thrones left off on an unusually heartwarming note for Arya. The season found her finally reuniting with her sister, Sansa (Sophie Turner) at their old home of Winterfell.

Not only that, but Arya also got to reunite with her brother, Bran (Isaac Hempstead Wright), and Brienne of Tarth (Gwendoline Christie). Together, and most satisfyingly, Arya and Sansa scheme to execute the deceitful Littlefinger (Aidan Gillen) together. After the Season 7 finale, "The Dragon and the Wolf," the two Stark sister's alliance is stronger than ever. In fact, their alliance could be the key to defeating Cersei, and perhaps even the White Walkers. Then again, according to some of these fan theories, Arya's goals could change in Season 8. Here's everything you need to know.

More like this
An 'Everything Everywhere All At Once' Star Just Joined The 'Loki' Season 2 Cast
By Grace Wehniainen
Alicent's Green Dress In 'House Of The Dragon' May Be An Act Of War
By Kadin Burnett
Nicola Coughlan Shared A Lady Whistledown Excerpt From ‘Bridgerton’ Season 3
By Grace Wehniainen, Alyssa Lapid and Sam Ramsden
You’ll Definitely Recognise Both Of Ty Tennant’s Parents
By Maxine Harrison
Get Even More From Bustle — Sign Up For The Newsletter