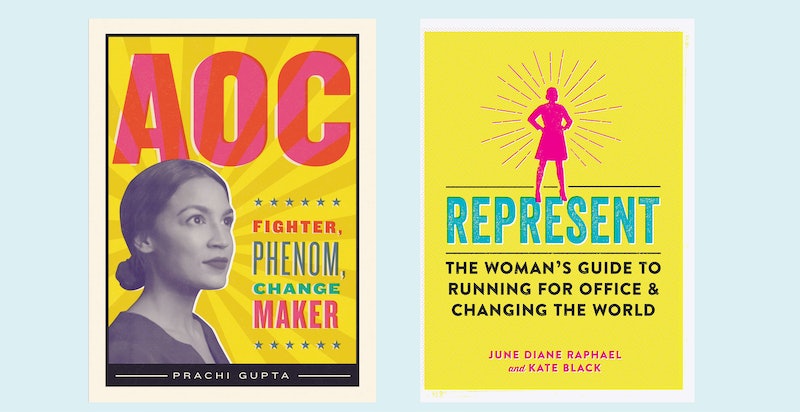 With the 2020 presidential race heating up, it's high time we took a look at some books that show life for women on the campaign trail. From former leaders to current contenders, the nine books on the list cover everything you need to know about women in politics, and may even offer some insight into how you can kick your own political career off right.

People set out on the campaign trail every year, but women and men encounter very different obstacles to their success. As The New York Times points out, we've only recently begun asking fathers who is taking care of their children while they're out on a road — a question that has long been used to cast doubt on the legitimacy of women's political pursuits.

Whether you're a woman who dreams of joining the Squad, or you just want to get a sense of what life is like for women on the campaign trail, in the list below you'll find memoirs and how-to guides from some of the biggest names in contemporary politics. Check out my recommendations below, and be sure to share your favorite political memoirs with me on Twitter.

Lead from the Outside: How to Build Your Future and Make Real Change by Stacey Abrams

Former House Minority Leader and 2018 gubernatorial candidate in her home state of Georgia, Stacey Abrams knows a lot about campaigning. In Lead from the Outside — previously published as Minority Leader — Abrams uses moments from her political career to highlight the ways in which would-be politicians can turn negatives like fear and self-doubt into glowing positives.

Although she isn't a campaigning politician herself, former First Lady Michelle Obama offers plenty of insight into her White House years in Becoming — her first memoir and the best-selling book of 2018, bar none. If you've ever wanted to learn about the toll that public response to the Obama administration had on his wife and daughters, Becoming is the book you need to read.

What Happened by Hillary Rodham Clinton

Published after Hillary Rodham Clinton won the popular vote but lost the 2016 presidential election to Donald Trump, What Happened is the story of that brutal and disappointing race, told from the former Secretary of State's perspective. Not only does Clinton dive into her personal feelings about the campaign, but she also provides reflective self-criticisms of her handling of events on the trail.

Represent: The Woman's Guide to Running for Office and Changing the World by June Diane Raphael and Kate Black

If you're here because you want to run for office someday, you owe it to yourself to pick up a copy of June Diane Raphael and Kate Black's Represent: The Woman's Guide to Running for Office and Changing the World. This book is chock-full of what-to-expects and how-to-handles, and trust me, you're going to need them all.

Memoir of a Race Traitor: Fighting Racism in the American South by Mab Segrest

Although Mab Segrest didn't run for political office, she did go on the campaign trail to fight against far-right political activists in 1980s North Carolina. First published in 1994, Memoir of a Race Traitor was re-released in 2019, in response to the rise of far-right movements across the U.S.

A Fighting Chance by Elizabeth Warren

Elizabeth Warren didn't run for office until she was 62 years old, and now she's a contender for the Democratic presidential nomination in 2020. In A Fighting Chance, Warren tells the story of her journey from law professor to presidential candidate.

Told by four women who have been deeply involved in American politics for the last 30 years, For Colored Girls Who Have Considered Politics offers up a broad history of modern-day presidential bids, beginning with Jesse Jackson's 1988 campaign.

Forgetting to Be Afraid by Wendy Davis

In 2013, Texas state Senator Wendy Davis performed a gruelling, 13-hour filibuster to stop a bill that would have allowed her state to use capital punishment on juveniles and placed massive restrictions on abortion providers. In Forgetting to Be Afraid, Davis recounts the major events of her life, which took her from working two jobs as a 19-year-old mom to being a Harvard Law graduate and Fort Worth City Council member.

As the newest congressional representative from New York's 14th district, Alexandria Ocasio-Cortez has rocked the Washington boat over the last several months. In AOC: Fighter, Phenom, Changemaker, Prachi Gupta explores Ocasio-Cortez's rise from Union Square bartender to Washington hotshot, as well as all the obstacles she's faced along the way.