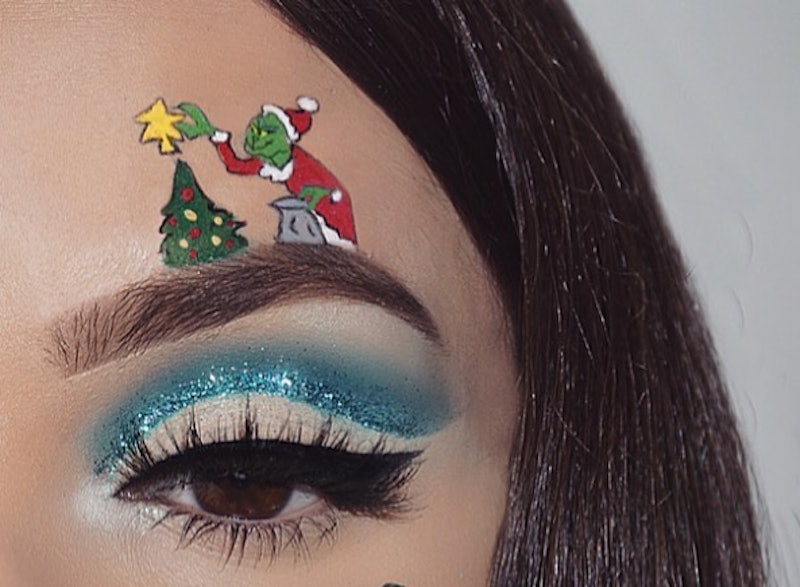 There are tons of ways to celebrate the season when it comes to makeup. From going makeup free and focusing on skincare to packing on the glitter, nothing is off limits. But there is one trend that is a bit unexpected. As PopSugar found, Grinch-inspired makeup is taking over social media. No matter the size of your heart, you're going to love these unconventionally green looks.

Say goodbye your your traditional sparkly eyeshadow and red lip, because there's a new way to celebrate the holiday. While the Grinch might not exactly be named the ultimate spreader of holiday cheer, the character does make for some incredible makeup looks. People are showing off their looks all over social media, which means that there's a look for every level of holiday spirit.

The most intricate are the full eye looks, like the one that Nasia Belli created for her Instagram page. I'm talking stunning eye makeup, liner, and even brow decorations for the holiday. The makeup artist created and incredible glittery light blue cut crease with thick black liner, but the real star of the show was her eyebrow art.

Instead of stopping at the gorgeous eyeshadow, Belli took it even further to create a little Grinch stealing a Christmas tree on the top of her brow. The makeup artist spent two and a half hours creating the makeup look, and it definitely paid off.

Belli isn't the only one getting into the Grinch spirit, either. Tons of other people have created different holiday makeup looks featuring the character. There's everything from red and green creations to full-face of Grinch-mas. No matter what holiday hoobie whatty you'll be attending this year, there's a tutorial for you.

You probably already have everything you need in your makeup bag to create these holiday makeup looks. Just pick one of these tutorials and get to practicing. Christmas is right around the corner, but this year the Grinch won't be stealing it — he'll be stealing the spotlight.

The Grinch might be a mean one, but this look slays. If you're not ready to commit to a full-on character, this is the perfect creation. Everyone will see the holiday inspiration.

Monochromatic is in this year, and the trend continues with Grinch tutorials. Whether you're looking to draw inspiration from the green brows, lips, eyes, or all three, you can't go wrong. Something tells me that the Grinch's heart would grow three more sizes after seeing this tutorial.

Who doesn't love a good holiday freckle? The Grinch has some pretty adorable facial expressions, if you look closely. This look incorporates everything about the holiday into one quirky look.

4. How The Grinch Stole Your Man

Looking to get color without going too crazy? This tutorial is perfect for you. It's titled "How The Grinch Stole Your Man," so you already know it's going to be great. A full face and a pop of color is key to nailing holiday style.

Not only does this person slay the makeup game completely, but the look goes above and beyond with an adorable little character on the brow. There's so much inspiration here that you could stare all day long.

Not fully committed to the concept of the Grinch? No problem. Try this Cindy Lou Who tutorial instead. Everyone will know exactly what movie you took inspiration from and it's a bit more wearable — sans the hair.

Or you could opt for completely unconventional and turn your entire face into the character. Add a red lip and you have the perfect festive, freaky look.

Does it get any better than this? There's no need to spend hours putting a Grinch on your brow when you could just embrace the holiday colors instead.

The transformation is in full effect with this look. It's the perfect way to let your inner Grinch shine.

My little makeup-loving heart is growing by the minute.