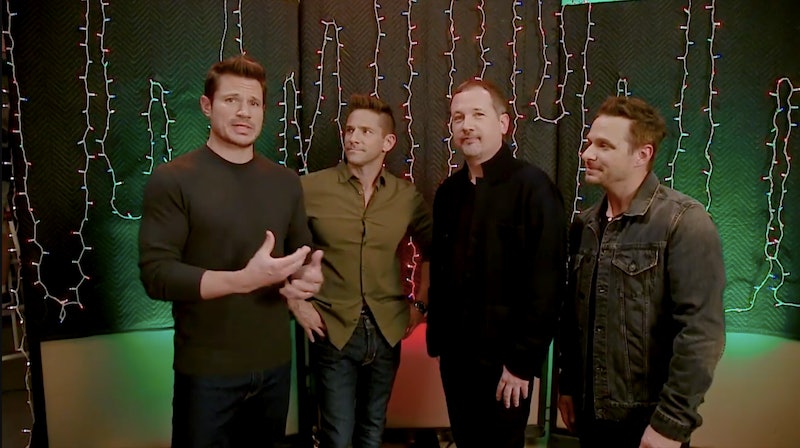 Getting into the spirit of the season, 98 Degrees shared their favorite Christmas memory, and it’s definitely not what you’d expect from the guys of the beloved '90s boy band. During an exclusive video promoting their new holiday album Let It Snow, the guys revealed what they remembered most about the sole Christmas they spent together in 1999. Just hearing them reminisce will totally take you back to all the joy of the '90s and early 2000s.

The 45-second clip opens with all four original members of the boy band standing by as Nick Lachey kicks things off by explaining their shared holiday experience, which occurred while they were performing on MTV's Fly2K tour in Paris. Fellow group member Jeff Timmons joins the convo, sharing that they spent the festive holiday watching the movie Fight Club together, as the quartet begins to jokingly make reference to one of the more widely remembered tidbits from the late '90s film.

To add more context to just how memorable things would become for the foursome amidst their European tour stop, Drew Lachey went on to remind his fellow group mates of the hurricane-like conditions that they endured from the violent European windstorms Lothar and Martin that hit while the group was visiting the French capital in December 1999.

It wasn't, by any means, your average holiday gathering, but the guys nonetheless managed to laugh it off, calling it a "very memorable" experience. It's exactly that type of attitude that has most likely helped to keep their relationship, seemingly both as friends and fellow group members in tact for the past two decades. Although, it's safe to say that a lot has probably changed in the years since their decade-long musical hiatus in 2002 as each member went on to explore other careers both inside and outside of the music industry.

Their most recent return to the entertainment scene is in celebration of their 20th anniversary, and it's accompanied by a tour in promotion of their latest Christmas project that was released on Oct. 20 of this year. The new album is the group's first release since their 2013 album 2.0 dropped more than four years ago. The seasonal offering also comes 18 years after their first holiday album, This Christmas was released in 1999. This Christmas became a huge success for 98 Degrees, selling over 1 million copies in the United States and earning them a Top 40 hit with the holiday single, "This Gift."

The Let It Snow tour kicked off on Nov. 24 and will continue right up until the weekend before Christmas which just in time for the band members to hopefully spend some time with their families for the holidays. Nick, who is married to actor Vanessa Lachey, welcomed a third child into his growing brood last December. Meanwhile his younger bro, Drew, has two children of his own, and Timmons, like Nick, also has a trio of undoubtedly adorable offspring. Band member Justin Jeffre, who prefers to keep a low profile when it comes to his personal life, appears to not have any children.

Total hotties, both then and now, this video of the band's time on the Fly2K tour is a blast from the past that's also worth checking out. It features an awesome group performance of their late '90s holiday hit "The Gift" that was filmed while amidst the European tour.

Though they are now all grown up with families of their own, it’s nice to see 98 Degrees back together and creating new memories while reflecting on some of the unforgettable moments that they've shared as a group.