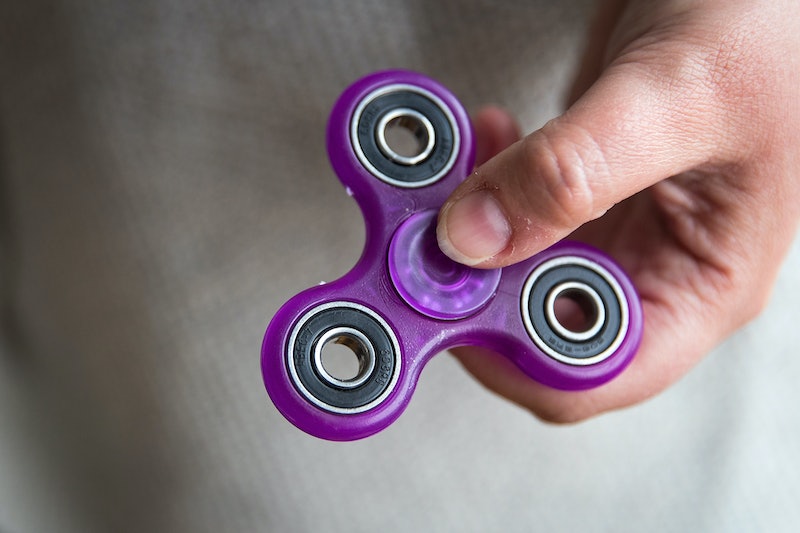 PSA to anyone with a fidget spinner: Spin it to your heart’s content ... just please don’t put it in your mouth. After her 10-year-old almost choked on a fidget spinner, a woman from Texas wants to make sure everyone, especially parents, is aware of its potential choking hazard. For those unfamiliar, fidget spinners are a handheld gadget that spins silently when pressed between your fingers and have recently become particularly popular among kids.

Kelly Rose Joniec, mother of 10-year-old Britton, detailed the recent incident in a Facebook post, explaining how her daughter nearly choked on part of the popular toy. “She said she'd put part of her fidget spinner in her mouth to clean it and somehow swallowed it,” Joniec says in her Facebook post. After trying to administer the Heimlich maneuver, Joniec took her daughter to urgent care. When doctors were unable to determine where the object was lodged, Britton and her mother were then transferred to Texas Children’s Hospital. There, an x-ray revealed the fidget spinner part was stuck in her esophagus. Thankfully, the gastroenterologist was able to successfully remove the object through endoscopic surgery.

Joniec continues in her post, “Fortunately we had a positive outcome, but it was pretty scary there for a while.” She notes the worry of the initial ingestion combined with the additional risk with Britton needing to be put under general anesthesia for surgery made for a stressful Saturday. The removed bushing Britton swallowed is one of four circular metal parts of the fidget spinner and is a little smaller than a the size of a quarter.

For children, choking on food, toys, and coins is the leading cause of injury and death. While this is the first widely reported incident of a child choking on a fidget spinner, children choking on toys is, as mentioned, far from uncommon and often severe. Joniec’s Facebook post notes that “not all spinners come with age-appropriate warnings,” and she wants to make sure parents know about the potential hazards of the pieces that can easily pop out, as she experienced.

While primarily popular among kids, fidget spinners are also growing in popularity among adults. Many use fidget spinners as self-care products to reduce stress. The Amazon description for one Fidget Spinner cites it as a way to cope with anxiety and is “great for ... ADHD.” However, there is little scientific research to back these claims.

In fact, some suggest fidget spinners may do more harm than good in certain instances. As one psychologist told Vox, “Using a spinner-like gadget is more likely to serve as a distraction than a benefit for individuals with ADHD.” However, at the Vox article states, there are likely bigger threats to our ability to concentrate, like cell phones.

While the science is still out on whether or not they’re a good stress reliever or help with concentration, the facts are pretty clear on one aspect of fidget spinners: Don’t put them in your mouth.