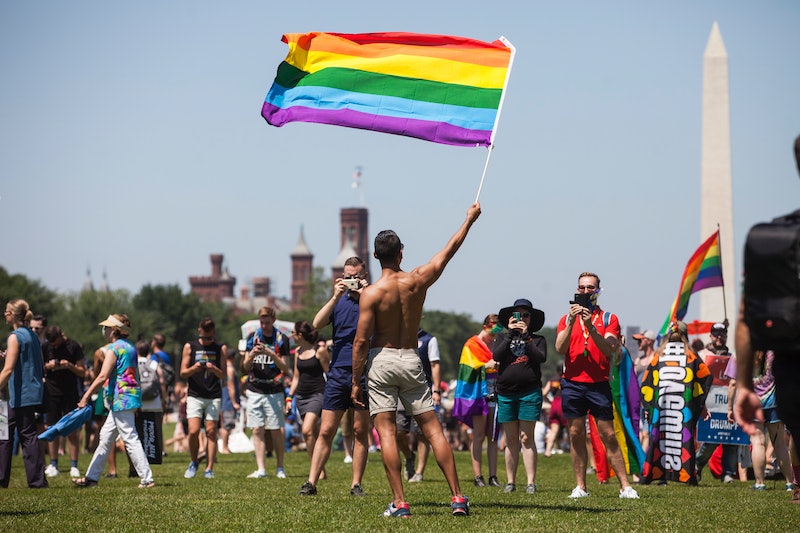 The event, which isn't sanctioned by the Democratic National Committee, will be hosted by Human Rights Campaign and the UCLA Luskin School of Public Affairs on Oct. 10, which is National Coming Out Day. HRC hosted similar forums for Democrats during the 2004 and 2008 nominating contests, according to the Post, but held no forums during 2012 or 2016.

"Millions of LGBTQ people will have their rights on the ballot in 2020," HRC President Chad Griffin said in a statement. "But today we are also a powerful voting bloc that will help determine the outcome. We’re excited to partner with UCLA Luskin and create an opportunity to hear candidates’ agendas for moving equality forward.”

A lot has happened since the last HRC-hosted forum on LGBTQ rights in 2008. In 2015, the Supreme Court legalized same-sex marriage in all 50 states, and the majority of Americans now say they support marriage equality. Barack Obama, who in 2008 said that he supported civil unions but not same-sex marriage, reversed course in 2012 and became the first sitting president to endorse marriage rights for all Americans. In 2011, the U.S. military officially ended "Don't Ask, Don't Tell," its policy of banning gay Americans from enlisting in the armed services.

The upcoming forum will focus on a wide range of LGBTQ-related issues, including hate crimes, conversion therapy, bullying and transgender rights, the Advocate reports.

The event's organizers will be using the same criteria as the DNC to determine who gets invited to the forum: Any candidate who polls at 1 percent or above in three national polls, or pulls in 65,000 donations across at least 20 states, will receive an invitation, according to the Advocate. This means that Fort Bend Mayor Pete Buttigieg, currently the only openly gay candidate in the race, will qualify.

Although gay marriage is now a settled issue — at least from a legal standpoint — LGBTQ policies are still as relevant and contentious as ever in American politics.

The Trump administration has pursued or implemented many anti-LGBTQ policies, including banning transgender Americans from the armed services, withdrawing school protections for trans students, stacking the courts with anti-LGBTQ judges, arguing in court that the Civil Rights Act doesn't protect LGBTQ Americans from discrimination and others. In addition, Vice President Mike Pence has been staunchly opposed to gay rights throughout his political career, a fact that hasn't been lost on LGBTQ activists during the Trump presidency.

Recent polling data suggests that LGBTQ voters are more likely to support Democratic politicians than Republicans. According to NBC exit polls, 82 percent of LGBTQ voters cast their ballots for Democratic House candidates in November's Congressional elections, while 78 percent voted for Hillary Clinton in the 2016 presidential election.