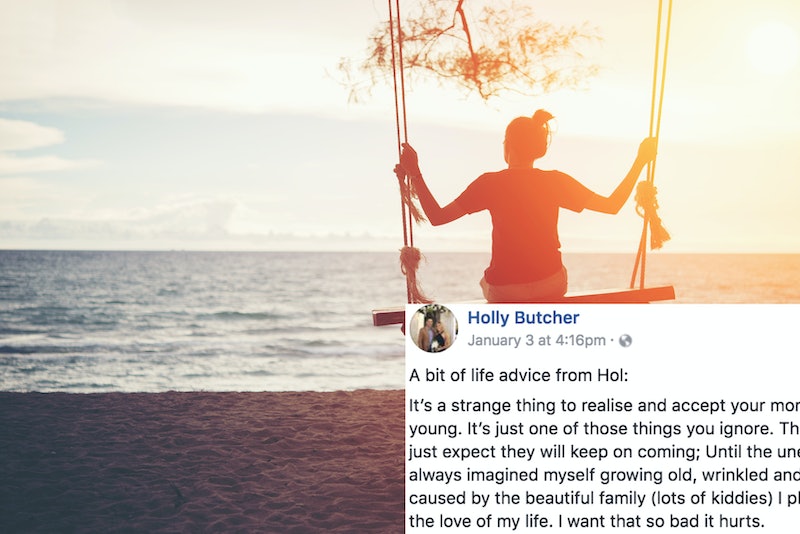 The new year is always a good time to make changes in your life, but this letter from a woman dying of bone cancer at the age of 27 may make you totally reevaluate it. Holly Butcher, a woman from New South Wales, Australia, knew she was in the last days of her life when she wrote a letter summarizing what she learned from confronting her mortality at an age when most of her peers were starting new careers and getting married. Grab a box of tissues and a stuffed animal, because you're going to need them.

When she was 26 years old, Butcher was diagnosed with Ewing's sarcoma, a rare type of bone cancer that primarily affects teenagers and young adults. Although the five year survival rate for patients whose tumors are still localized is about 70 percent, that number drops to 15 to 30 percent if the cancer has spread by the time it is diagnosed. Around one year after her diagnosis, as her cancer entered its final stages, Butcher began to reflect on how terminal illness changed the way she valued each moment. She shared her thoughts in a self-described "note before I die," which she asked her family to post on Facebook after her death early on Jan. 4.

"It’s a strange thing to realise [sic] and accept your mortality at 26 years young. It’s just one of those things you ignore," she wrote. "The days tick by and you just expect they will keep on coming... until the unexpected happens."

In the letter, Butcher spoke honestly about her wish to live, admitting that she wanted to grow old with a partner and children "so bad it hurts." "I’m 27 now. I don’t want to go. I love my life. I am happy..[.] I owe that to my loved ones. But the control is out of my hands," she explained.

She went on to advise readers to "stop worrying so much about the small, meaningless stresses in life" and keep in mind that death is inevitable — so make life worth it. She wrote:

"Those times you are whinging about ridiculous things (something I have noticed so much these past few months), just think about someone who is really facing a problem. Be grateful for your minor issue and get over it. It’s okay to acknowledge that something is annoying but try not to carry on about it and negatively effect other people’s days.

Once you do that, get out there and take a freaking big breath of that fresh Aussie air deep in your lungs, look at how blue the sky is and how green the trees are; [i]t is so beautiful. Think how lucky you are to be able to do just that - breathe."

She pointed out that in the end, appearances matter far less than you would think, and health should never be taken for granted.

"I swear you will not be thinking of those things when it is your turn to go. It is all SO insignificant when you look at life as a whole. I’m watching my body waste away right before my eyes with nothing I can do about it and all I wish for now is that I could have just one more Birthday or Christmas with my family, or just one more day with my partner and dog. Just one more."

For that matter, Butcher reminded readers that mental health is just as important as physical. If something makes you unhappy, cut it out of your life. "Be ruthless for your own well-being," she wrote.

On the flip side, she wrote that we should be kinder to each other and ourselves. "Give, give, give. It is true that you gain more happiness doing things for others than doing them for yourself," she wrote. "I wish I did this more."

Rather than throwing cash at material things, she also suggested spending it on experiences that make you or someone else happy. "It is a weird thing having money to spend at the end.. [sic] when you’re dying," she wrote. Instead, "buy your friend something kind instead of another dress, beauty product or jewellery [sic] for that next wedding. ... Take them out for a meal, or better yet, cook them a meal. Shout their coffee. Give/ buy them a plant, a massage or a candle and tell them you love them when you give it to them."

Above all, don't waste time on an unhappy life. "Have the guts to change," she wrote. "You don’t know how much time you’ve got on this earth so don’t waste it being miserable." She concluded by thanking those who donate blood regularly; transfusions played a huge role in prolonging her life.

But these were just the highlights of the post — Butcher's heartbreaking letter should be read in its entirety. To read it, head over to Facebook, where it has been shared more than 54,000 times. Don't forget to bring those tissues.