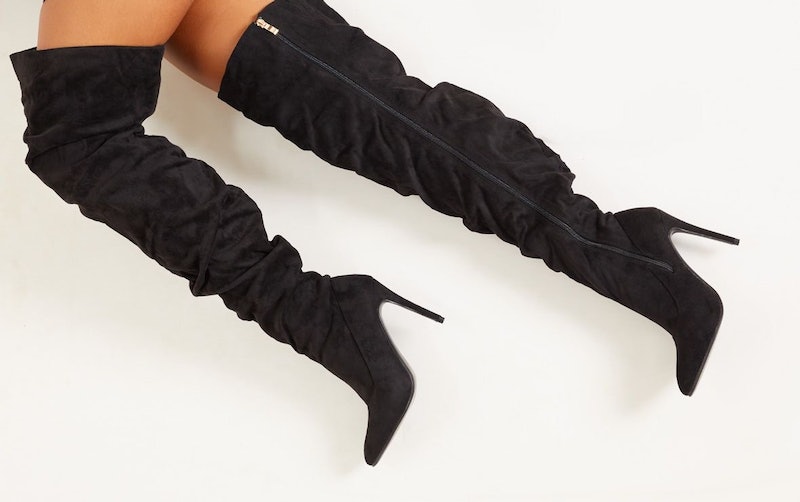 It appears that thigh high boots aren't a brand new fashion staple adorning our closet shelves, where recently a 500-year-old skeleton was discovered wearing leather thigh high boots. Earlier this summer, a skeleton of a man was found underneath layers of mud near the River Thames in southeast London. While it was common to have workers and fisherman working and living by the river around that time, the shoe choice was unusual for the medieval period. But who could fault the guy for wanting to make a bold fashion statement as he went about his day in London?

According to The New York Times, specialists believe that the man could have been a fisherman, a dock worker, a sailor, or a scavenger that searched for small treasures near the river for money.

“By studying the boots, we’ve been able to gain a fascinating glimpse into the daily life of a man who lived as many as 500 years ago,” Beth Richardson, a specialist with MOLA Headland, said in the statement.

The river was a dangerous place to work even in the Middle Ages, and it's hypothesized that the mysterious man might have died because of his occupation along the water.

There are many theories about the 15th-century man's occupation because the boots are thought to be directly linked with his work. Archaeologists pointed out that leather was an expensive material back then and often re-used, so specialists believe it is unlikely that he was buried purposefully by the river, especially while wearing such a hot commodity on his feet.

Also, the length of the boots themselves hinted at his possible career on the water. Since they extended up to the thighs, they would be ideal for wading through water and pushing through the sticky Thames mud, pointing at the likely possibility that they were work shoes. They were also made to take a beating and to last, where researchers confirmed that the thigh high boots were reinforced with extra soles and stuffed with material like moss to help them fit better.

In the end, these leather thigh highs didn't seem like a fashion choice, but more like a work uniform requirement. But why was he found by the Thames? While it's not unusual to find burials by shores, the way that his body was found hints that it might have been an accidental death. He was found face-down with one arm above his head and the other bent to the side. "These clues could suggest that he fell or drowned and was covered quickly by the ground as it moved with the tide," MOLA Headland, the firm that led the dig, shared in a statement.

The researchers believe that the boot-wearing man likely died under the age of 35, and the archaeologists discovered that he had deep groves in his teeth that were most likely caused "by a repetitive action, like passing rope between his teeth as a fisherman might," the firm shared. Whether your thigh highs are for winter fashion or for your 9-to-5 by the river, it's clearly a timeless piece.