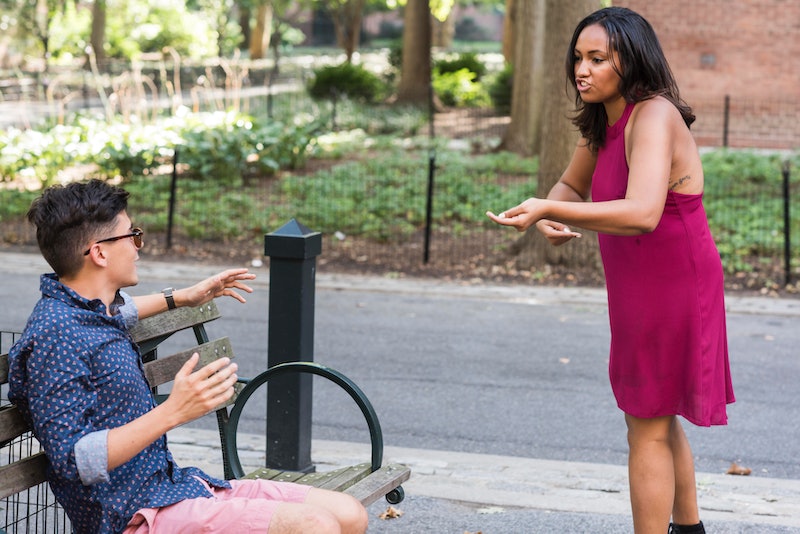 New research from the University of Nevada and the University of Michigan looked at 373 heterosexual couples and found that being in a relationship with a lot of fighting and disagreeing could be terrible for your well-being, The Guardian reports. The researchers followed couples for the first 16 years of their marriage — long enough to get a good sense of how the relationship was progressing — and compared those who had a lot of disagreements and arguments to those who got along better. Disagreeing a lot was found to have a negative effect on both men and women, although, interestingly, men seemed to feel it more.

"We looked at whether disagreeing about multiple topics, such as children, money, in-laws and leisure activities, had health implications for wives and husbands over the first 16 years of marriage," Study author Rosie Shrout of the University of Nevada, tells Bustle. "We were surprised that conflict was more important for husbands' health than for wives' health. It might be that the number of topics is not as impactful for women, but rather how conflict is resolved. If spouses are defensive or hostile during conflict, we might see."

From trouble sleeping to fidgeting to problems at work or doing the things you want to do, more disagreement meant more health problems.

There's research about the health benefits of marriage, like getting sick less often and healing faster, but perhaps we haven't been seeing the whole picture. In this study, even in the couples who got along great and did experience some health benefits for the first few years, those wore off as time went on.

Although marriage has been shown to provide some health benefits, it's important not to assume that being married is enough. As Shrout points out, it's not walking down the aisle or signing a piece of paper that gives you the benefits of being married, but the relationship itself and the companionship and fulfillment it provides. You have to keep working at having a strong, healthy relationship to receive the protective benefits.

And on the other hand, it's important to be aware of the potential health consequences of conflict. It can lead to inflammation and greater levels of stress hormones, Shrout explains and, eventually, to health problems. But conflict doesn't have to go that way.

"We might think that conflict and disagreements are always bad, but what’s important is how we disagree and deal with conflict," Shrout says. "Spouses are bound to disagree and experience conflict, but instead of shutting down or being defensive, spouses can try to understand their partners’ perspectives and validate their concerns. By learning how to better handle conflict, its impact on health might not be as harmful." So if you're in a relationship, don't worry if issues come up — just be sure you handle them maturely.

Why Single Can Be The Better Choice

Marriage is sometimes looked at as this positive, transformational process, but that's not true for everyone. Firstly, some people just aren't a natural fit for married life. "Some people are genuinely happier single than in a relationship, and that can be normal and healthy,” Antonia Hall, psychologist, relationship expert, and author of the Sexy Little Guide books, tells Bustle. "For some people, being single allows life to feel full and satisfying as it is.”

And, even with those people who are happier in a relationship, that happiness is only there if the relationship is working. With all of the societal pressure to be paired up or settled down, it's easy to feel like you should just find someone and make it work. But being single is so much better than being in a bad relationship. Plus, as most people who have been in a tough relationship know, there's a special kind of loneliness you feel when you're lying in a bed with someone you're totally disconnected from. It's an awful feeling.

Being married or in a long-term relationship can bring a lot of joy and even health benefits into your life. But only if it's a rewarding, nourishing relationship. The stress of a bad relationship can have major health consequences, so if it feels like something is off in your relationship, make sure you're in the relationship for the right reasons. Just being with someone isn't enough.