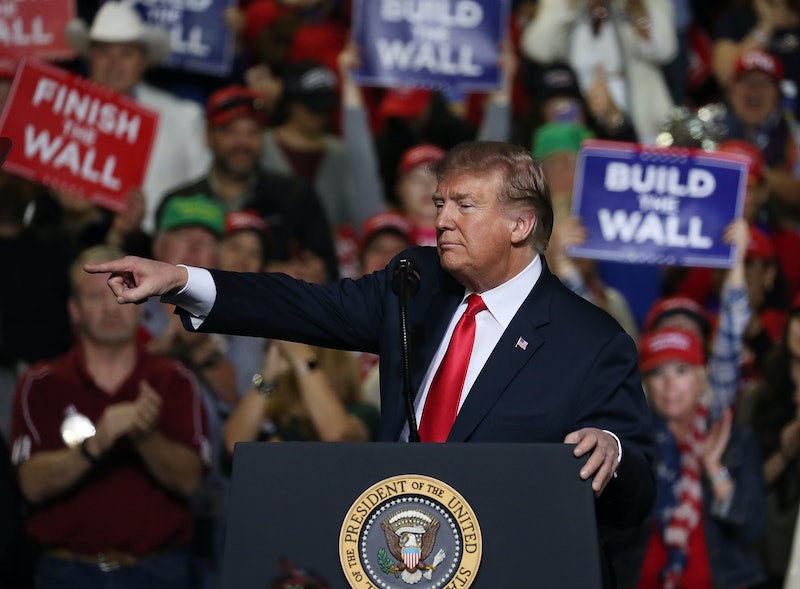 A violent assault on a member of the media occurred Monday as President Donald Trump and Beto O'Rourke held dueling rallies in El Paso, Texas. Midway through the president's event, an apparent Trump supporter attacked a BBC cameraman, as BBC reports. Video footage shows the man wearing a red MAGA hat and shouting, "F*ck the media!"

Cameraman Ron Skeans told the BBC that he didn't see his attacker, who he said gave him a "very hard shove." He added, "I didn't know what was going on." The Trump supporter, who has not been identified, ran and jumped onto a platform full of reporters covering the event, according to The Washington Examiner, before pushing journalists and cameras and causing some people to fall over the ledge. Trump reportedly noticed the incident and asked if everyone was okay before continuing with the rally. The BBC reports that Trump had blasted the media's portrayal of him at some point before the assault occurred.

BBC correspondent Gary O'Donoghue witnessed the incident and told the broadcast network that it was "an incredibly violent attack." The BBC said in a statement that the man was removed from the rally and that Skeans "is fine," adding that it "is clearly unacceptable for any of our staff to be attacked for doing their job."

"Just attended my first ⁦@realDonaldTrump⁩ rally where my colleague BBC cameraman Rob Skeans was attacked," reporter Eleanor Montague tweeted on Monday. "The crowd had been whipped up into a frenzy against the media by Trump and other speakers all night."

O'Donoghue told the BBC that "this is a constant feature of these rallies — a goading of the crowds against the media." He added that, although many reporters were involved in the attack, Skeans "got the brunt of it."

A 2017 Gallup report found that the gap between Republicans' and Democrats' trust of the media had reached an all-time high. The pollster reported that 72 percent of Democrats felt confident in the media, whereas just 14 percent of Republicans did. A Gallup survey from last year found that Republicans were much more likely than Democrats to feel that the media was biased.

Several high-profile assaults and threats have targeted the media in the past few years. Five workers at Maryland's Capital Gazette were killed by a gunman in June. CNN has reported receiving dozens of death threats, as well as some bomb threats. And Rep. Greg Gianforte (R-Montana) allegedly body-slammed a Guardian reporter in 2017.

Trump has often received some of the blame for these incidents and for Republicans' distrust of the media. The president has said he thinks some media outlets are the "enemy of the people" (48 percent of Republicans agreed with this label in a 2018 Ipsos poll). Commenting on the alleged Gianforte assault, Trump said in October, "Any guy that can do a body-slam, he's my guy."

United Nations experts have condemned the president's remarks and warned that they could encourage assaults against journalists. Trump's "attacks run counter to the country's obligations to respect press freedom and international human rights law," David Kaye and Edison Lanza said in a joint statement in August. "We are especially concerned that these attacks increase the risk of journalists being targeted with violence."