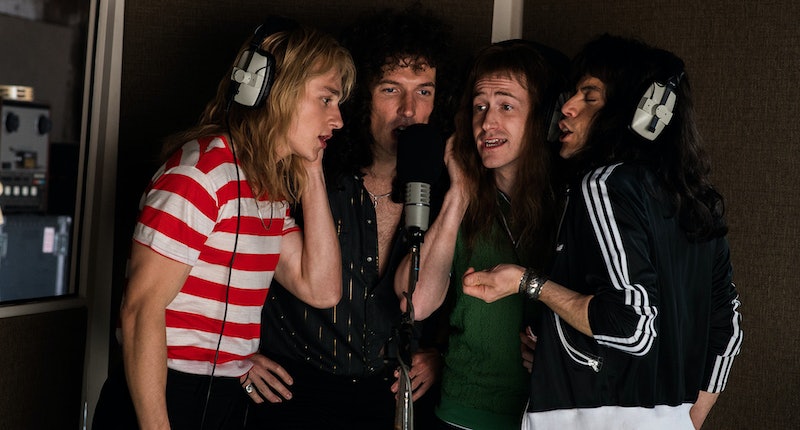 After its huge win in the Best Picture Drama category at the 76th Golden Globes on Jan. 6, Bohemian Rhapsody is now being released as a sing-along, according to Variety. The news couldn't be anymore exciting for fans of Queen, who can now come to the theater prepared to sing their hearts out to the band's iconic music catalog.

While going to the movies is typically an experience in which spectators are expected to keep quiet,Variety reported that the updated version will display song lyrics on-screen, encouraging viewers to sing along with many of the movie's most infectious tunes including, "Bohemian Rhapsody," “We Will Rock You,” “Another One Bites the Dust,” and "We Are the Champions.”

With the new release, the biopic, which details the life and career of legendary entertainer Freddie Mercury and his band Queen, will be bumped from its current total of 1,080 domestic locations to more than 1,300. (The sing-along version will be released on Friday, Jan. 11.)

A teaser trailer for the Bohemian Rhapsody re-release features groups of spectators waving their arms in the air while loudly singing "We Will Rock You," "Bohemian Rhapsody," "We Are the Champions" and other tunes as the lyrics scroll across the screen during the film.

The minute-long snippet, which was shared on Queen's official on YouTube channel, also showcased reviews from several moviegoers who have already previewed the sing-along. During the clip, several commenters referred to the new version of the project as "brilliant," "electric," "amazing," and "superb." Meanwhile, another viewer revealed that the atmosphere left them with a great deal of emotions, saying that they were "in tears for part of it."

After receiving word about the sing-along's debut, fans quickly rushed to Twitter to express their joy about the film's second-coming — and it's clear that many are making serious plans to revisit the film at theaters this weekend.

The rerelease could certainly prove to add more success to the film's already impressive box office number as fans will likely be excited to relive the glory of the movie's most glorious moments in song. The film has already grossed $194 million domestically, pulling in an additional $549 million internationally since its debut in early November. These numbers make it the highest-grossing music biopic of all time, according to Pitchfork.

In addition to raking in some serious dough at the box office, the film has also been doing pretty well on the awards circuit. Rami Malek, who received critical-acclaim for his flawless portrayal of Mercury, recently took home the Best Actor Golden Globe Award for his role in the film. Meanwhile, Bohemian Rhapsody beat out fan faves such as: A Star Is Born, Black Panther, BlacKkKlansman, and If Beale Street Could Talk for Best Motion Picture — Drama at the ceremony. Most recently, the film earned seven BAFTA nominations and two SAG Award nominations, according to E! News.

The sing-along version certainly makes the film worth the revisit. So gather all of your best friends and biggest Queen fans, because there's definitely no better way to spend the weekend than to rocking out to the year's biggest movie with those you love the most.