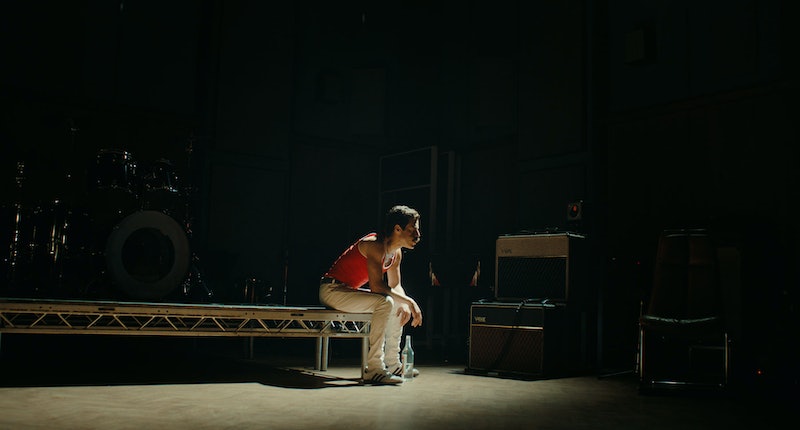 The new film Bohemian Rhapsody tells the story of the English rock band Queen, most notably focusing on the band's late lead singer and main songwriter. Freddie Mercury tragically passed away in 1991 at the age of 45 due to complications from AIDS, per The Guardian, but many people who knew him are still around today. Perhaps the most notable is Mary Austin, a woman whom Mercury had referred to as "the love of his life." But just who was she, and where is Mary Austin in 2018?

It's hard to say exactly where Austin is today, as she is not a public figure. She is still alive at 67, and MSN's Natalie Rivera wrote in June that Austin was "living a quiet life away from the public eye." Austin and Mercury dated for around six years in the early 1970s, sharing an apartment together in London for much of that time. Mercury referred to her as his common-law wife, but the pair split after the singer had an affair with a man and informed Austin of his homosexuality, according to MSN. But even though their romantic relationship ended, their friendship did not. And while Mary Austin today shies away from the spotlight, there have been moments in the past where she has shared details of her time with Mercury, most notably in the 2000 documentary Freddie Mercury: The Untold Story.

"I see it as a love that you accept and somehow understand because you want the person inside to grow," Austin said in the documentary when discussing her relationship with Mercury after his coming out. Their strong friendship endured throughout the rest of Mercury's life. She acted as his advisor and worked as his personal secretary throughout the 1980s, playing an important role in several significant life events. It was Austin who found Mercury his mansion in Kensington, England; and it was she who first learned of his HIV diagnosis from his doctors — knowing of his illness before the singer himself, according to Rolling Stone's Mikal Gilmore.

The pair's strong bond has continued even after Mercury's death. Having no children and never married, Mercury made Austin the main heir of his fortune upon his passing. He left her his mansion, his music royalties, and much of his wealth, according to MSN. He also confided in her — and only her — the place where he wished his ashes to be kept after he was cremated. To this day, Austin has never revealed the location of Mercury's final resting place, according to Rolling Stone.

In Bohemian Rhapsody, the character of Austin is portrayed by Lucy Boynton, and the importance of her role wasn't lost on the actor. "One of the main things that attracted me to the part of Mary was the dynamic that she and Mary had throughout his entire life and their entire lives together," Boynton told Flicks & the City. "And although it starts as a romantic relationship, it is something that is so much deeper than that and so important to both of their existences that it carries on even after they realize they can't be together as a couple."

Mary Austin may not desire the spotlight, but the massive positive impact she had on the life of Freddie Mercury is about to be shared with a great number of people once Bohemian Rhapsody opens in theaters on Nov. 2.

More like this
Kumail Nanjiani & Emily V. Gordon’s Relationship Timeline Is Literally A Movie
By Jake Viswanath
Olivia Wilde & Harry Styles Are Reportedly "Taking A Break" After Almost 2 Years
By Jake Viswanath and Radhika Menon
The 'Love, Lizzo' Harry Styles Scene Is Just 1 Moment That Made Fans Feel Seen
By Brad Witter
Will Smith Reflects On "Horrific" Chris Rock Oscars Slap In First TV Interview
By Sam Ramsden
Get Even More From Bustle — Sign Up For The Newsletter