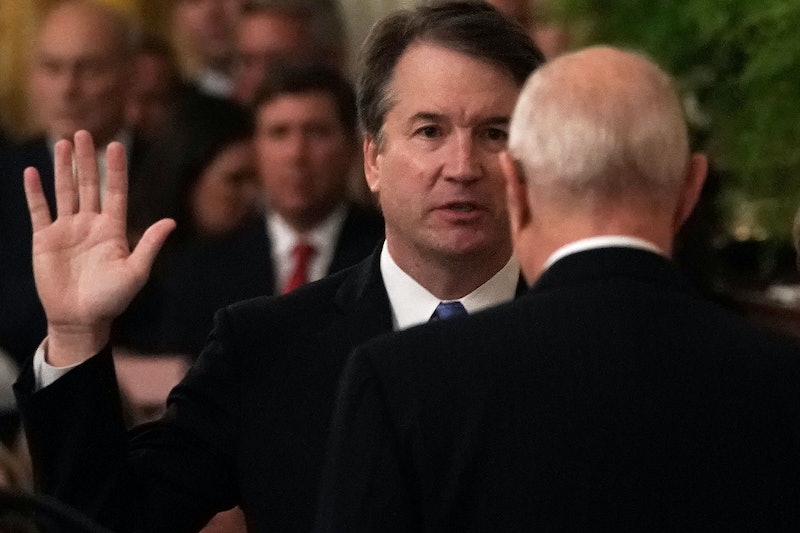 On Thursday, California Supreme Court Chief Justice Tani Cantil-Sakauye said she's now a former Republican. The judge left the GOP after Brett Kavanaugh's confirmation to the Supreme Court. Cantil-Sakauye told CALmatters, a nonprofit news organization covering California, in a phone interview that the final straw in her decision to leave the GOP was Kavanaugh's confirmation hearings, when Christine Blasey Ford testified that Kavanaugh had assaulted her when the two were teens. Kavanaugh denies her allegations.

Cantil-Sakauye became a judge nearly 30 years ago, and rose to chief justice of the state Supreme Court in 2011. She discussed the decision to leave the Republican Party with her husband and friends, and decided it was the right move for her. "I've been thinking about it for some time," she said. Her advisers told her, "You didn't leave the party. The party left you.”

Cantil-Sakuye also cited her displeasure with the direction of the GOP in her home state of California. "I felt compelled to make a choice now. It better suits what I do and how I approach issues," Cantil-Sakauye said, according to NBC News.

Cantil-Sakuye said she had been considering leaving the party for two years. "I've been a Republican since I was 18. And I never really gave it a great deal of thought, because always there has been a give and take on both sides," Cantil-Sakuye told The Washington Post. "Nothing beyond the normal give and take of the heat of politics."

She saw "a certain amount of polarization [in politics] that doesn't reflect who I am as a person and the values I have as a person," Cantil-Sakuye told The Washington Post.

The confirmation of Kavanaugh to the Supreme Court came after an accusation by Christine Blasey Ford that she was assaulted by Kavanaugh when they were both teenagers. Kavanaugh denied her accusation in statement to The Washington Post and in his testimony to the Senate Judiciary Committee. The Associated Press reported that at least 20.4 million people watched the Kavanaugh hearing on ABC, CBS, NBC, CNN, Fox News Channel, and MSNBC, but that total didn't include viewers on PBS, C-SPAN and the Fox Business Network. Cantil-Sakuye was one of those viewers.

"I saw the hearings not as a chief justice, but I saw it as a mother of two young women. And I was greatly disturbed by the process," Cantil-Sakauye told The Washington Post. "It was partisan. It was the tone. It was hiring a woman to place questions to another woman. It was the atmosphere, the timing."

She told the newspaper that she changed her party registration the night of the hearing and also updated her official online bio. "In the 28 years that I've been on the bench, my party has been referred to but it’s never been a factor," she told the Post. "I had completely forgotten about it."