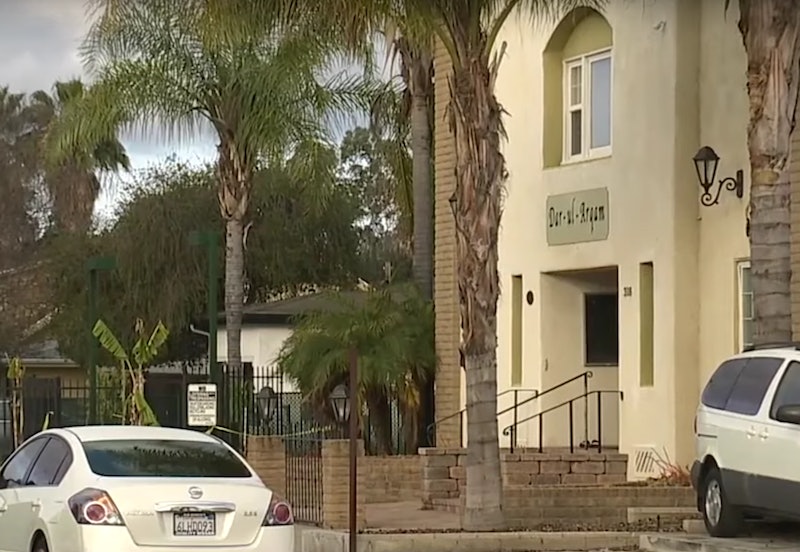 The mass shooting at two mosques in New Zealand earlier this month has led to an uptick in Islamophobic incidents in some places, and one of the latest targeted communities is a city north of San Diego, California. A mosque in Escondido was set on fire on Sunday in an apparent attack that police are saying referenced the New Zealand massacre.

An arsonist is suspected to have started the fire on the outside of the Dar-ul-Arqam mosque around 3:15 a.m. and used an accelerant so that it would spread more quickly, according to The San Diego Union-Tribune. Seven people were inside worshipping, but none was injured, the Escondido Police Department said in a Sunday press release.

The occupants managed to put out the blaze using a fire extinguisher and the fire department and police arrived on the scene shortly after to assist, according to the Union-Tribune. Part of the wall was blackened; graffiti was also drawn on the driveway and has since been removed, per the The Washington Post.

"Graffiti left behind by the suspect made reference to the shooting incident in New Zealand," the police department said in its release. "The incident is being investigated as both an arson and a hate crime." Police have not yet shared the exact contents of the message because they believe that doing so could impair their investigation, per the Post.

"I never could have expected that this would happen here, two blocks from my house," Yusef Miller of Escondido's Islamic Society of North County told The Washington Post. "The connection was chilling. It was a clear homage to what happened in New Zealand."

The incident occurred just over a week after a deadly mass shooting at two mosques in Christchurch, New Zealand. The massacre has set off other Islamophobic incidents around the world. In the United Kingdom, Tell MAMA, an organization that tracks anti-Muslim hate crimes in the region, told The Guardian that the rate of Islamophobic incidents there rose by nearly 600 percent in the week after the Christchurch shooting.

Members of the Muslim community in Escondido held a prayer and security vigil on Sunday night in response to the suspected arson attack. The mosque has created a LaunchGood page to raise money for repairs, improving security, and building community between Escondido worshippers and the rest of the city.

Escondido police Lt. Chris Lick urged community members to "remain absolutely vigilant and watchful" at their centers of worship, according to The San Diego Union-Tribune. He said that people should notify police of any suspicious activity near religious buildings, including sightings of "people who are not supposed to be there." Lick also said that law enforcement will be watching these centers particularly closely.

Miller told the Union-Tribune that police had already increased their presence in the area after the Christchurch massacre. "We were vigilant, but now we have to be hyper-vigilant because it came to our back door," Miller said. "When that happens, especially in a place like Escondido, that makes us all look over our shoulders."