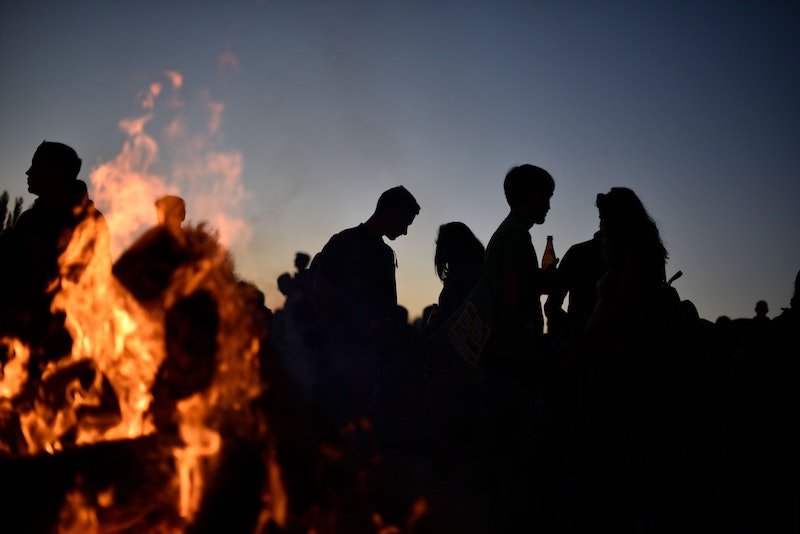 A face-off between witches and priests may sound like the plot of a horror movie, but it's more realistic than you'd think. On Thursday, Jezebel reported that to counter an upcoming hex on Kavanaugh by some witches, a Catholic exorcist will hold a mass. Kavanaugh, who was accused of sexual assault by multiple women (allegations he categorically denies), is the focus of an event that witches in Brooklyn will hold on Saturday, just weeks after he was confirmed to the Supreme Court.

Father Gary Thomas, who is an exorcist for the Diocese of San Jose, California, told the The National Catholic Register that he will hold a mass for the justice on Thursday and Saturday. In comments to the outlet, Thomas said that he was "appalled" by the hexing, which will take place at the Catland Bookstore in Brooklyn. "I sent this to a load of exorcists yesterday and their reaction was similar to mine," he said. "That shows this is not something that is make believe."

Lamenting what he perceived as increasingly bold displays of satanic worship, Thomas said, "They are more confident that the general public will be more accepting of the demonic... This is a conjuring of evil — not about free speech. Conjuring up personified evil does not fall under free speech. Satanic cults often commit crimes; they murder and sexually abuse everyone it [sic] their cult."

Clearly displeased with the witches' plan, Thomas said, "They are going to direct the evil to have a permanently adverse effect on the Supreme Court justice." But the exorcist's comments showed that he was not particularly worried about Kavanaugh's fate. "When curses are directed at people in a state of grace, they have little or no effect," Thomas said.

Details for the hexing have already been laid out on the website Eventbrite. Organizers for the event said on the site, "Please join us for a public hex on Brett Kavanaugh and upon all rapists and the patriarchy which emboldens, rewards and protects them." Tickets are going for $10. According to the organizers, 50 percent of the proceeds will be split between Planned Parenthood and Ali Forney Center, a community center for homeless LGBTQ youths.

Organizers added, "We will be embracing witchcraft's true roots as the magik of the poor, the downtrodden and disenfranchised and its history as often the only weapon, the only means of exacting justice available to those of us who have been wronged by men just like [Kavanaugh]."

According to The National Catholic Register, Catholics will pray not only for Kavanaugh but also those organizing the witches' event in Brooklyn. Thomas said, "The decision to do this against a Supreme Court justice is a heinous act and says a lot about the character of these people that should not be underestimated or dismissed. These are real evil people."

This won't be the first time that these witches' planned hexing got the media's attention. On Sunday, Amy Kremer, the co-founder of the Women for Trump PAC, said on MSNBC, "It is a scary time right now. Now you’ve got witches that are placing a hex on Brett Kavanaugh."