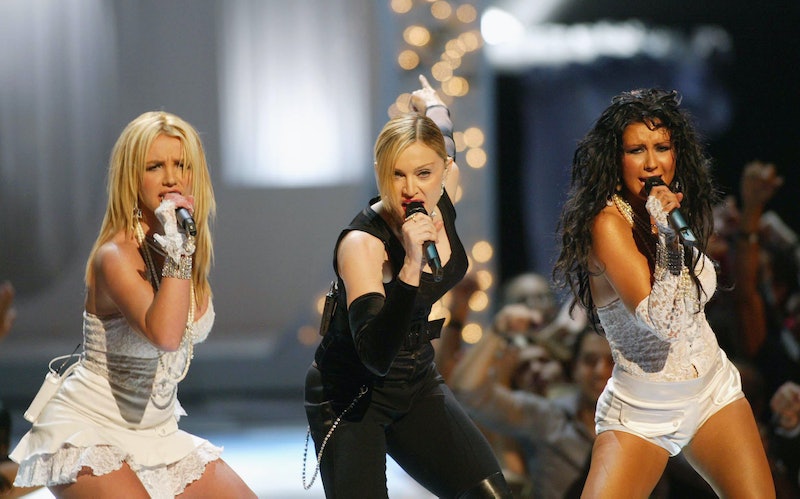 If you grew up worshiping '90s pop princesses, you might want to save your tax refund for a ticket to the ultimate Vegas shows: Xtina and Britney. The "Dirrty" singer is the newest artist to snag a Sin City residency, and Christina Aguilera says reuniting with Britney Spears in Las Vegas is almost definitely going to happen. She’s a genie in a bottle, baby, and she’s gonna make your tween pop dreams come true!

Aguilera officially announced her Las Vegas residency on Tuesday during an appearance on The Ellen DeGeneres Show. The six-time Grammy winner will kick off Christina Aguilera: The Xperience on May 31 at Zappos Theater at Planet Hollywood Resort and Casino. “The Xperience is going to be my most ambitious show yet,” she said in a press release on Tuesday, according to Rolling Stone. And if that isn’t x-citing enough, Aguilera told E! News that there's a good chance she’ll link up with her longtime pal Spears, who also has a Vegas residency. “We’re in Vegas, it’s inevitable,” she said. "There's so much history where I'm going, and I just feel like calling up all those girls—Lady Gaga is the newest one there. I wanna get the real scoop from all of them and be like, 'What's it really like?' What else is Vegas for besides a girls trip?!

Aguilera and Spears have been making magic since pre-Y2K. The two pop superstars both started out on the Mickey Mouse Club in the early '90s, along with fellow future stars Justin Timberlake, Ryan Gosling, and Keri Russell, among others.

And don’t get it twisted: even though you may remember a so-called feud between Aguilera and Spears, that was all rumor generated by the press to pit legends against each other. In an interview with Cosmopolitan in October 2018, Aguilera said she was hurt by the rivalry that was projected onto her and Spears in the early 2000s. Talking about the blowback she received for her “risque” makeover during the Stripped era, Aguilera said:

"It’s hard to hear yourself being called names. I remember being hurt by these commercials on MTV, pitting Britney as the good girl and me as the bad girl. It’s like, if I’m going to be demure and innocent, that’s okay. But if I’m going to just be myself, I’m trouble."

In fact, the last time fans really saw a Spears-Aguilera collab was at the 2003 MTV Video Music Awards when they performed alongside Madonna. Of course, that moment went down in pop culture history after Madonna and Britney kissed, and so did Madonna and Christina, though that got super downplayed. The kiss is widely known as one of the most iconic and "shocking" (for the time) moments in VMA history, though a lot of people don't remember Aguilera's part. According to NME, "After Madonna kissed Britney the camera quickly cut to catch Justin Timberlake’s response (he and Spears had recently split) rather than catch the full kiss with Aguilera."

No matter, though, because Aguilera ain't getting left out of the Las Vegas residency lineup, and there's no end to the possibilities of her and Britney Spears taking the stage at the same time, and it's exactly what a girl wants.