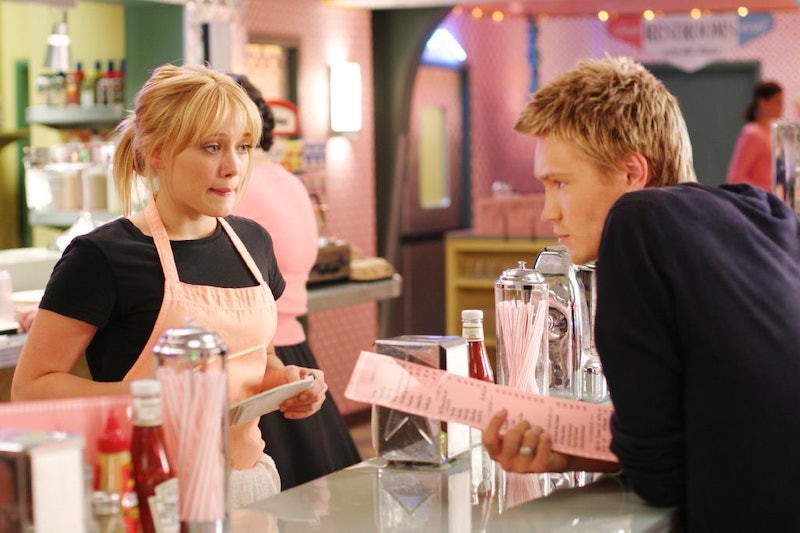 Every month, Netflix bestows upon us new TV shows and movies to enjoy, but at the same time, some really good stuff has to leave, and this time, that includes a few nostalgic favorites. But if you do nothing else this summer, you need to make sure you watch A Cinderella Story before it leaves Netflix in July. This Hilary Duff classic definitely holds up — especially if you're looking for something that will bring you back to simpler, happy times, like when we were all younger, more innocent, and Facebook was still cool.

When A Cinderella Story finally arrived on Netflix last August, those of us who were teens or preteens when the movie was first released in 2004 couldn't possibly have been more excited. For many fans, it had been a long time since we'd seen the movie, and revisiting it was like taking a time machine back to the early 2000s, when Duff and Chad Michael Murray opposite each other as onscreen high school love interests was actually a plausible casting decision.

But unfortunately, this masterpiece will be leaving Netflix on July 30, so if you want to watch it again, you're going to have to do it soon — and TBH, you should probably watch it more than once, just to be on the safe side.

If your memory is a little fuzzy about A Cinderella Story — and no one would blame you if it was, since it came out almost 15 years ago — here's the gist of this movie's very predictable (yet wonderful) plot. Basically, Duff plays Sam, a high school senior who's father died and left her to live with her evil stepmother and her stuck up step sisters. She's waitressing and saving up to go to Princeton, and in the meantime, she's emailing back and forth with a mystery guy who turns out to be Austin Ames, the most popular guy at her school. They meet at a dance, and the rest of the movie is a lot like the original Cinderella — they fall in love, but Austin has to figure out who Sam is first.

It's hard to say exactly what the best part of this movie is. For many, it's Sam's monologue, in which she tells Austin — in the rain at a football game and in front of everyone, mind you — that "waiting for you is like waiting for rain in this drought: useless and disappointing." Also known as the biggest burn of the early 2000s.

Or maybe the best part is Jennifer Coolidge as Fiona, Sam's stepmom, who says something hilarious in practically every scene she's in, like this unforgettable line:

Or the best part might actually be Regina King, who played Sam's boss at the diner, filling the fairy godmother role. She's never gotten the credit she deserves for this movie, which is a true shame. What's Cinderella without a fairy godmother?

OK, so there's no "best part." The whole movie is great.

This movie definitely deserves a watch this month, especially if you've never seen it before — or if you just haven't seen it since you've been an adult. Through a grown-up's eyes, it's just becomes that much more difficult (and thereby hilarious) that Austin didn't recognize Sam from school just because she was wearing a tiny mask that covered the skin around her eyes. Seriously, how?

And not to sound dramatic or anything, but if you don't catch A Cinderella Story at least one more time before it's gone from Netflix for good, your 14-year-old self would be so disappointed in you.

More like this
Here’s Everything Coming To & Leaving Netflix In December
By Jake Viswanath
You’ll Be Able To Stream Bullet Train Before The Holidays
By Arya Roshanian and Radhika Menon
These ‘Love Actually’ Plotlines Are “Out Of Date,” According To Director Richard Curtis
By Grace Wehniainen
This Iconic ‘Love Actually’ Scene Drove Alan Rickman “Insane”
By Grace Wehniainen
Get Even More From Bustle — Sign Up For The Newsletter