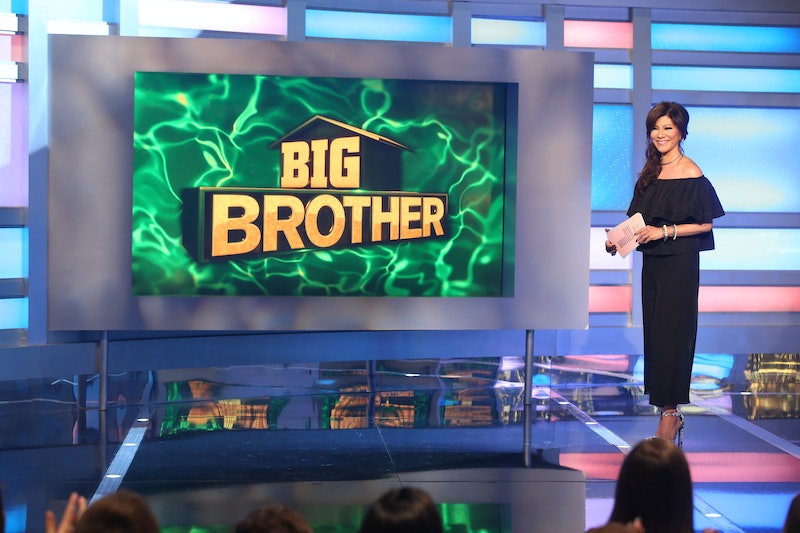 The Gr8ful alliance is still in power on Big Brother 21 now that Nick won the new HoH, but things could change after the final Whacktivity competition. The Panic power will be a "classic" Big Brother power, according to host Julie Chen, and fans already have so many guesses. The competition will air July 14 with Anaylse, Nick, Jess, and Christie playing. (Kemi was scheduled to play but then she was evicted.)

One of the most popular guesses on Twitter is that the power will be the Coup D'etat. It was originally used on BB All Stars and BB 11, and it allows for the removal of two noms to be replaced by two other noms chosen by the Coup D'etat holder. However, that's pretty close to the power that Ovi already won, which makes it unlikely to also be the Panic power. Similarly, another option is the Diamond Power of Veto, which allows the holder to remove a nominated player after the Veto and replace the nom themselves. It was last used on BB 4 and BB 12.

Another speculated option was the Reset or Rewind Button, which restarts the whole week. That twist was previously used in BB 14 and BB 16 respectively. Some fans also think Pandora's Box will come back. It was a twist in Seasons 11, 12, 13, and 14 that allowed the HoH to open a mystery door. The door would then either reveal something good for the HoH and bad for the other houseguests or something bad for the HoH and good for the houseguests. However, if it's a Whacktivity prize, it could allow the Whacktivity winner to choose whether or not to open the door. Another popular option is Battle of the Block, used last on Seasons 16 and 17. It required four nominees to face off against each other in pairs with the losing pair going on the block.

Of course, those are just some of the popular guesses. In 20 seasons, Big Brother has had so many different twists. So there are a ton of options that fans may not have even thought of yet. However, the power needs to make sense for the Whacktivity winner. For example, Ovi's let him force a new nomination ceremony and Jack's lets him force a redraw of Veto players. By extension, it would make sense if the Panic power forced a vote change or something else having to do with eviction. Perhaps it could be the Halting Hex power from BB All Stars and BB 19, which stopped eviction night and kept anyone from going home.

Fans will likely be speculating until the power's reveal on July 14, but whatever it is could totally mess with Nick's HoH week. The power is received before the nomination ceremony, so, depending on what it is, his HoH plan could be messed with from the very beginning. Nick and Gr8ful may think they're going to sail through this week, but if a wildcard Whacktivity winner like Jess emerges, the house could see a real shakeup for the first time this season. But, no matter who wins, it will be exciting just to see a classic BB power return. Fortunately for viewers, there are just a few more days until it all goes down.

More like this
Yes, That's Christina From 'The Bachelor' In Taylor Swift's "Fifteen" Music Video
By Brad Witter
Rachel Fuda Gave Birth Just Weeks Before 'RHONJ' Season 13
By Brad Witter
Genevie Explained Why She Was Wearing A Sling During 'The Bachelor'
By Grace Wehniainen
Twitter Thinks This Is The Real Reason Zach Sent Christina Home On 'The Bachelor'
By Grace Wehniainen
Get Even More From Bustle — Sign Up For The Newsletter
From hair trends to relationship advice, our daily newsletter has everything you need to sound like a person who’s on TikTok, even if you aren’t.