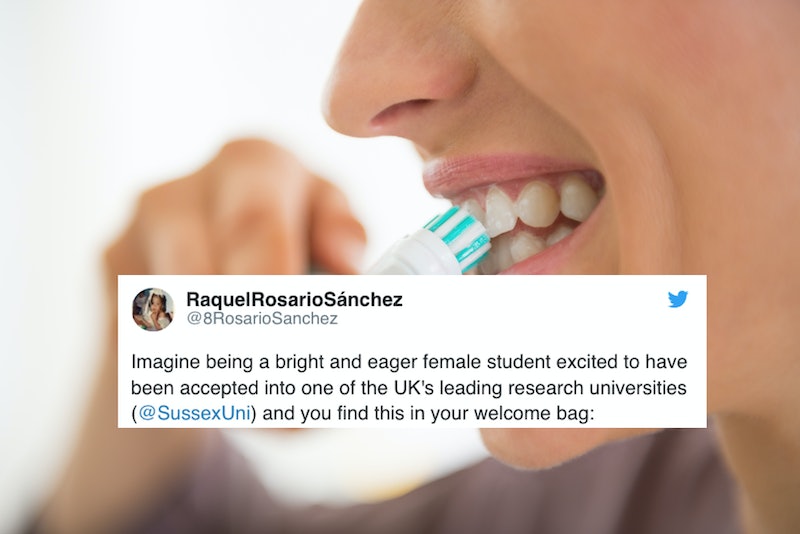 As school has come back in session, students at one U.K. university have received a welcome that some are calling sexist. The University of Sussex included suggestive promotional material from Brushbox, a dental hygiene brand, in a freshman student welcome box. The material in question is a double-sided advertisement card for Brushbox featuring a close-up photo of a woman’s open mouth dripping with what appears to be toothpaste foam. In case there was any question about whether the card was meant to read as suggestive, the opposite side of the card says, “Whether you spit or swallow as part of your (twice…) daily oral regime, place your oral health on autopilot with Brushbox.” The words “spit” and “swallow” are both in bold.

A spokesperson for the University of Sussex Students’ Union issued the following statement to Bustle:

“We were very disappointed to find this promotional material in our Dig-In boxes, and will be reviewing whether to renew our contract with this supplier.” A University of Sussex spokesperson added, “We can absolutely see why this promotional material in our Students’ Union’s freshers packs has sparked such a strong reaction. We’re sure this discussion will continue and that our Students’ Union and other student unions will feed back the reaction to the company responsible.”

Bustle also reached out to Brushbox but did not receive comment at time of publication; Brushbox issued an apology to BuzzFeed News, saying that the impact of the card go against the values of the company.

“We are really sorry if anyone has been offended by the promotional image used in the Dig-In boxes. We now realize it was inappropriate and misguided of us to use this type of image as a way to raise awareness of dental health issues. We completely understand that the image could be deemed as derogatory to women and for that we are truly sorry - this was never our intention, and we take full responsibility for any upset it has caused.BrushBox is a company which prides itself on its family and ethical ethos and we are very disappointed that something which was meant to encourage good health habits amongst students has caused any offense."

The welcome box caught attention after it was shared on Twitter by user Raquel Rosario Sánchez (@8RosarioSanchez). “Imagine being a bright and eager female student excited to have been accepted into one of the UK's leading research universities … and you find this in your welcome bag,” Sánchez tweeted, sharing a photo of the promotional card. “Sexism is sexism even when it's ‘a joke.’” She concluded, “Women deserve better than this.”

All three organizations involved in distributing the Brushbox promo card have since apologized either via social media or to other news sites.

In addition to their above statement to Bustle, the University of Sussex responded to Sánchez’s initial tweet with an apology. The response reiterated that the university understands why the response has been negative and that they will work to continue the dialogue around the promo card.

Dig-In, the company responsible for curating the university’s welcome box, also issued a statement to BuzzFeed News apologizing for spreading the Brushbox promotional material: “Dig-In would like to apologize unreservedly for its part in distributing Brushbox’s promotional material. This insert, distributed in our Freshers boxes does not in any way reflect our high ethical standards and we have put immediate measures in place to ensure this doesn’t happen again."

The response to the Brushbox promotional cards focused on the effect it may have on students, specifically how “disappointing” it is to see a university associate itself with such misogynistic materials. “We do not raise strong, articulate young women for them to be treated this way,” one primary school responded. “Nor do we educate our thoughtful young men to tolerate it this behaviour towards their cohort.”

In addition to the implied sexist messaging, some called out that the promotional card doesn’t even call for good oral hygiene habits. “My dental hygienist told me when I was seven that you should never swallow toothpaste on purpose,” one user tweeted. “So it's also wrong in health terms.”

Sánchez acknowledged the university’s apology, adding the campus might consider workshops to “fight back against the sexual objectification of women.” Writing off the promotional material as “just a joke” or as a harmless, cheeky advertisement doesn’t acknowledge the fact that sexist jokes normalize sexist behavior. Studies have shown that this kind of casual sexism perpetuates sexist language and the misogynistic treatment of women. Thankfully, all the organizations involved in distributing this material seem to acknowledge that its effects can be more detrimental than one “just a joke.”