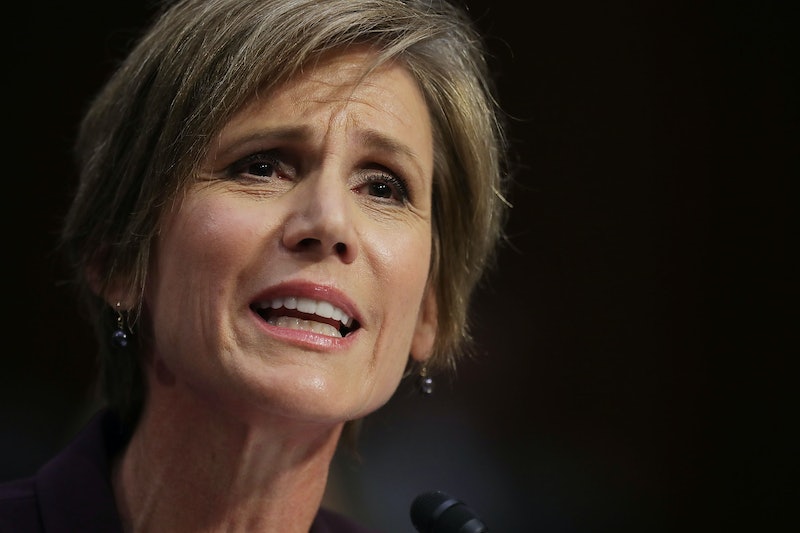 Amid her day of testimony in front of the Senate committee investigating Russian interference in the 2016 presidential election, as well as ties between Trump campaign staffers and Russian officials, it seems like a prominent conservative legal group is fishing for Sally Yates scandals. To be precise, Judicial Watch ― a conservative-friendly legal watchdog founded in 1994 during the GOP's various investigatory crusades against former president Bill Clinton ― is filing a Freedom of Information Act (FOIA) lawsuit aimed at getting its hands on Yates' emails from Jan. 21 to Jan. 31 of 2017.

That short window of time represents Yates' tenure as acting attorney general under President Donald Trump, who was officially sworn into office on Jan. 20. To be clear, FOIA requests themselves are not unusual, and in instances where FOIA requests are ignored, neither are lawsuits. It's a vital means of holding government officials accountable, a hugely important journalistic tool, and it's the law, too. According to Judicial Watch, the initial FOIA request was made in February, and the emails have not yet been turned over by the Justice Department, which led to Monday's lawsuit.

But based on the statement put out by the group's president Tom Fitton, the reasoning behind this particular effort sounds rather suspect.

For instance, Fitton cites her refusal to implement Trump's refugee and immigration ban on constitutional grounds, even though one federal judge after another has validated her position. Between that and the fact that she warned the administration about former national security adviser Mike Flynn being potentially compromised by the Russians, Fitton seems to argue there's a shadowy conspiracy at play that Yates' emails might reveal.

Between her involvements in the Russian surveillance scandal and her lawless effort to thwart President Trump's immigration executive order, Sally Yates' short tenure as the acting Attorney General was remarkably troubling ... Her email traffic might provide a window into how the anti-Trump "deep state" abused the Justice Department.

So, there you have it. While there's nothing untoward about using the FOIA process itself, this effort is being undertaken out of suspicion that Yates is involved in some kind of "anti-Trump deep state" plot to undermine his administration. The core reasoning appears to be that she noted the unlawfulness of Trump's executive order and accurately informed the White House, "Hey, this Mike Flynn guy is kind of a problem."

If that's the basis of suspicion upon which conservative groups plan to attack Yates, they're welcome to try. But as she demonstrated in her incredibly even-keeled, effortlessly smooth exchange with Senator Ted Cruz on Monday, she's clearly thought a lot about the decision she made with regards to Trump's refugee ban. And the simple facts of the case regarding Flynn do not reflect on her as anything but a prescient voice whose warnings were sadly, and seemingly scandalously, ignored.