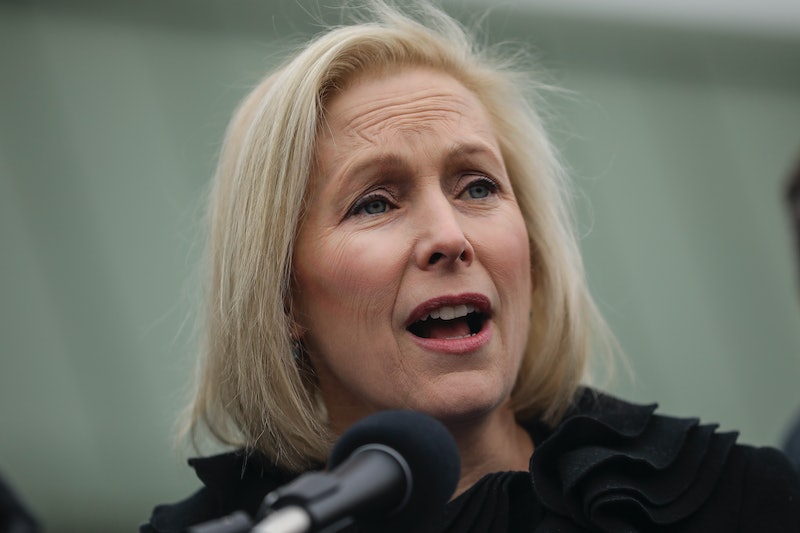 A Democratic presidential candidate and vocal proponent of the #MeToo movement has reportedly fired a staffer amid allegations that her office mishandled a sexual harassment complaint against him. According to Politico, a former female aide claims Kirsten Gillibrand's office handled her sexual harassment complaint so poorly last year that the woman ultimately resigned.

The unnamed woman detailed the alleged events leading up to her departure in a resignation letter, which was sent to Gillibrand directly in August 2018 and published this week by Politico. She suggested in the letter that Gillibrand's office does not follow the senator's advice when it comes to responding to reports of sexual misconduct. Bustle has reached out to Gillibrand's campaign for comment.

“Your office chose to go against your public belief that women shouldn’t accept sexual harassment in any form and portrayed my experience as a misinterpretation instead of what it actually was: harassment and ultimately, intimidation,” the woman wrote in her resignation letter.

The former staffer claimed in her letter that she filed reports of sexual harassment against another aide, Abbas Malik, while working for Gillibrand (Malik did not respond to Politico's request for comment). She alleged that when Malik learned he would be promoted to a supervisory role over her, he made several unwanted sexual advances.

The woman claimed that an investigation was completed quickly, and that other staff members characterized the harassment she reported as "a misinterpretation," per Politico. A spokesperson for Gillibrand told The Hill that the investigation found "employee misconduct that, while inappropriate, did not meet the standard for sexual harassment."

"When I had the courage to speak up about my harasser, I was belittled by her office and treated like an inconvenience,” the woman told Politico. “She kept a harasser on her staff until it proved politically untenable for her to do so.”

Gillibrand's office told Politico that the woman's resignation letter "contained clear inaccuracies and was a major departure from the sentiments she shared with senior staff in her final days in the office." The news outlet reported that neither the senator nor her office ever responded to the letter.

According to Politico, Malik continued to work for Gillibrand until last week, when he was dismissed after the news outlet presented the senator's office with a series of separate allegations made against him by other people.

Publicly, Gillibrand has made a name for herself as a fearless #MeToo advocate willing to advance the rights of victims even when it means going up against her party. Most notably, she broke ranks with many Democrats when she called for former Democratic Sen. Al Franken's resignation after he was accused of sexual misconduct (Franken has denied some allegations against him and apologized for others).

“I think when we start having to talk about the differences between sexual assault and sexual harassment and unwanted groping you are having the wrong conversation,” Gillibrand said at a December 2017 news conference, according to The New York Times. “You need to draw a line in the sand and say none of it is OK. None of it is acceptable."

It's highly likely that sexual assault policy will hang heavy over the 2020 race, given the important role that #MeToo has played in politics since the movement's mainstream inception. The former staffer's complaints against the personnel procedures in Gillibrand's Senate office may become a sticking point for the presidential hopeful, and she'll likely be asked to account for them on the campaign trail.