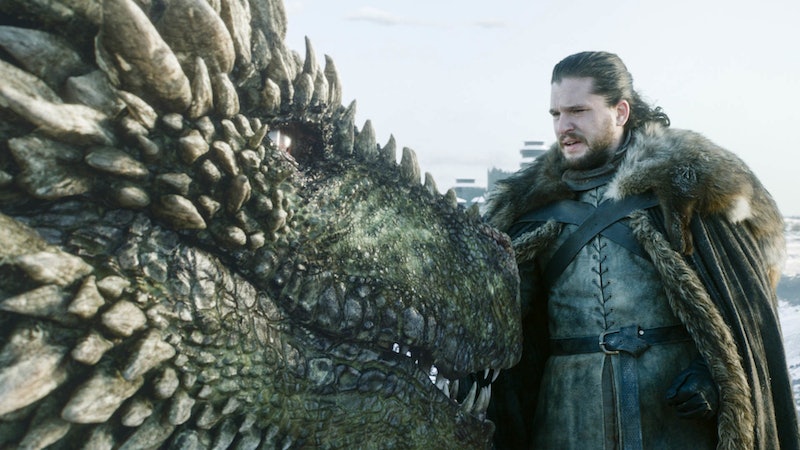 Fans who have been missing Game of Thrones since the series ended back in May will finally get a chance to return to the Seven Kingdoms — but they'll have to wait a while. During a recent appearance at the annual Television Critics Association winter tour, HBO Programming President Casey Bloys announced that House of the Dragon, the Targaryen-centric Game of Thrones prequel will likely premiere in 2022.

The series — which will be based on George R.R. Martin's novel, Fire & Blood — was first announced back in October, around the same time that HBO announced that they had cancelled a different Thrones prequel, starring Naomi Watts. "Pilots – sometimes they come together, sometimes they don’t," Bloys told Variety about why the network decided to go with one prequel series over the other. "And I would say that was very much the case here. There’s nothing I would point to and say "Oh, this was the problem.'"

However, Bloys did reveal that since House of the Dragon is based on Martin's writing, it was easier for the show's creative team to delve into the story of House Targaryen. "That [prequel] was 8,000 years before the current show, so it required a lot more invention," he explained. “One of the benefits of 'House of the Dragon' is there was a text from George and there was a little bit more of a roadmap."

While it's unclear when, exactly, House of the Dragon will take place, Martin's novel chronicles 150 years of history in the House Targaryen, who are the ancestors of Daenerys (Emilia Clarke). In the Song of Ice and Fire universe, the Targaryens are descended from Valyrian dragon lords, who ruled on the Iron Throne for generations until Jaime Lannister (Nikolaj Coster-Waldau) killed the "Mad King" Aerys and forced his children into exile outside of Westeros. According to Entertainment Weekly, the prequel will chronicle House Targaryen's history and rise to power, and the events leading up to The Dance of the Dragons, which the outlet described as "a massive civil war in the Seven Kingdoms held between two rival branches of House Targaryen."

Thus far, House of the Dragon is the only Game of Thrones prequel that has received a series order, though The Hollywood Reporter revealed in May 2017 that at one point, HBO was considering five separate spinoffs based on the hit fantasy saga. None of those potential series took place after the Game of Thrones finale, despite the fact that Arya (Maisie Williams)'s decision to explore what's "west of Westeros" opened a door to a possible follow-up series. "I want this show — this Game of Thrones, Dan and David's show — to be its own thing. I don't want to take characters from this world that they did beautifully and put them off into another world with someone else creating it," Bloys told THR in May, explaining that the network had no interest in a sequel series.

The Game of Thrones finale may have wrapped up the stories of the Stark children and established the fate of the Iron Throne, but at least fans can expect an eventual return to the Seven Kingdoms, even if it takes a few years to get there.

More like this
Emilia Clarke Shares More Details About The New 'Game Of Thrones' Series
By Maxine Harrison
'Stranger Things' Fans Are Begging For Steve To Live For The Funniest Reasons
By Grace Wehniainen
'Stranger Things' Season 4 Volume 2 Trailer Teases New Episodes Coming July 1
By Grace Wehniainen and Gabrielle Bondi
The 'Ms. Marvel' Review Bombing Controversy, Explained
By Radhika Menon
Get Even More From Bustle — Sign Up For The Newsletter