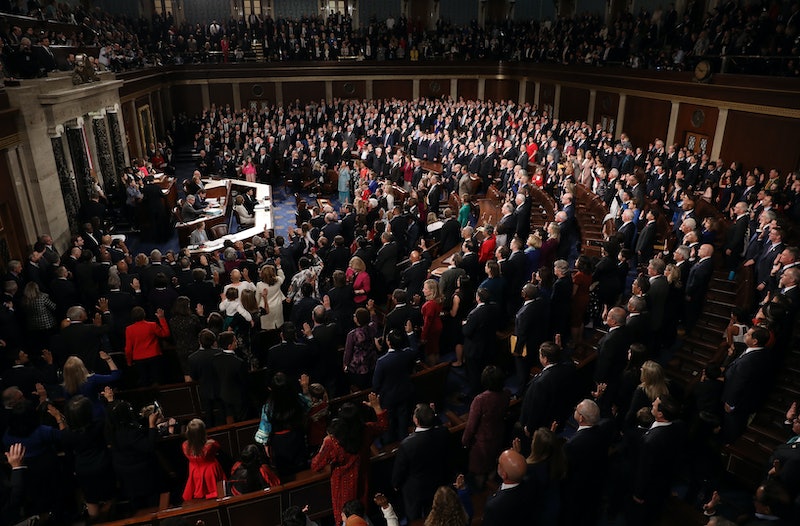 The new Congress and its staff are settling into their second full week on the job, but not necessarily at equal rates of pay. "The Gender Pay Gap in Congressional Offices," a new study from Emory University graduate student Joshua McCrain and Boston University Assistant Professor Maxwell Palmer, found that the nation's gender pay gap extends to congressional staffers as well. And while Democratic and Republican lawmakers are both to blame for the disparity, McCrain and Palmer report Republican House and Senate offices are responsible for the largest pay gaps.

Salaries for congresspeople and senators are set by law. Those numbers vary based on leadership roles, but the yearly salary for rank-and-file representatives and senators is $174,000. Legislators are each allotted an annual budget, which they use to pay for office expenses, including their staffers' salaries, according to Newsweek.

Analyzing almost 46,000 congressional staffers from more than 1,000 offices between 2000 and 2014, the study found that the average male staffer was paid $57,547, while the average female staffer earned only $51,457. That 11-12 percent gap was similar for both House and Senate staffers, according to the study.

That gender disparity is also apparent when looking at who gets promoted. McCrain and Palmer found that while women actually make up a majority — 55 percent — of congressional staffers, they only hold 34 percent of senior office positions. While that's true on both sides of the aisle, the study shows that Republican offices tend to hire fewer women at a senior level, and compensate them less.

McCrain and Palmer noted that there are a lot of factors at play with gender wage and employment gaps, including how men and women choose jobs and negotiate salaries, meaning that the disparities can't necessarily be chalked up to gender discrimination. Even so, they write, it's a "concerning finding."

"If female staffers are valued less or potentially discriminated against then their voices in decision making are more likely to be limited," McCrain and Palmer say in the study, "and their presence within more senior roles (which we observe) occurs at a lower rate."

McCrain's and Palmer's study, published late last week, comes at a time when diversity and accessibility are being debated in reference to congressional staffing. In September, Congress agreed to start mandating intern pay for the first time, a move that opened up the program to young people from lower-income backgrounds who may not have been able to afford the experience previously.

Rep. Alexandria Ocasio-Cortez and others in her freshman class have continued to make diversity an issue as they set up their congressional offices. Ocasio-Cortez in particular made headlines last month after she pledged to pay her interns $15 per hour, already much higher than the federal minimum wage.

"Shedding light on these issues might inspire Congress or the Chief of staff to make the pay gap an issue," Palmer told CNBC, adding that increasing office budgets would "give members of Congress a chance to reduce gender gaps."