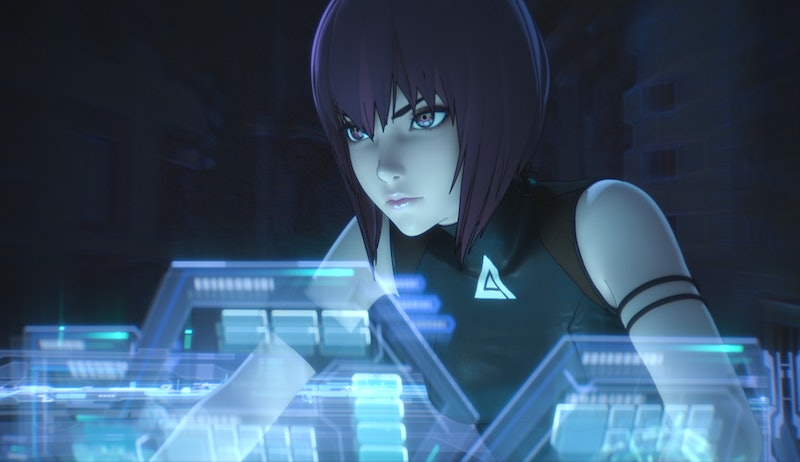 Three years after the blockbuster film starring Scarlett Johansson, Ghost in the Shell is getting new life as an anime, premiering Thursday, April 23 on Netflix. Titled Ghost in the Shell: SAC_2045, the series picks up as a "posthuman" species of AI poses a threat to humanity, which Motoko Kusanagi and her Section 9 crew are tasked with fighting. Fortunately, the series production company Production I.G confirmed that Ghost in the Shell will have a Season 2, per Anime News Network.

While it was officially confirmed in April 2020, fans already knew a second season was likely coming down the pipeline. In an interview with Nuke the Fridge Gaming at 2018's San Diego Comic-Con, Production I.G president Maki Terashima-Furuta said there will be two seasons of the anime, each consisting of 12 episodes. And while there's been no official release date, some outlets claim it could be coming later this year or in 2021. This would be a much faster turnaround than it took to produce Season 1. Ghost in the Shell: SAC_2045 was first announced back in April 2017, per Anime News, so it's taken three years to arrive on streaming.

In addition to its newest iteration, the franchise has had a long life in several different formats. In 1989, artist Masamune Shirow began publishing his Ghost in the Shell manga in Weekly Young Magazine, according to Paste. In 1995, it was adapted into an eponymous animated film directed by Mamoru Oshii, which Vulture's Emily Yoshida calls "the high point of the franchise." Ghost in the Shell has since been continued in several animated sequels, a 2002-2005 TV show, and of course, ScarJo's controversial live action film, which was universally panned.

Now, however, the series is going back to its roots, featuring voice acting from the original cast. According to the Japanese site Eiga, voice actors from the 1995 film Atsuko Tanaka, who plays Major Motoko Kusanagi; Koichi Yamadera, who voices Togusa; and Akio Ôtsuka, who plays Batou are all reprising their roles.

"I feel that the approach to Motoko Kusanagi hasn't changed for the last 25 years from the first performance of Ghost in the Shell," Tanaka told Eiga of her character in a translated interview. "There are times and settings that change depending on the work, but can you say that the basic parts have not changed." As a result, Tanaka said that she "thought that it would be better to perform [Motoko] with the same attitude as before."

One change from previous franchise installments is that the Netflix series will be released simultaneously around the globe, which Tanaka told Eiga "is a symbol of how the times have caught up with Ghost in the Shell."