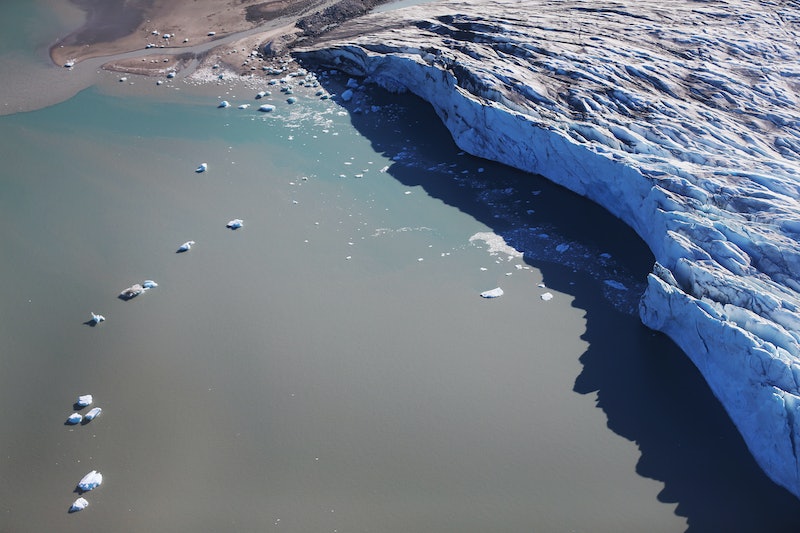 According to a new NASA study, a massive glacier in Greenland is starting to grow back after years of decreasing in size — but the good news comes with a big asterisk. According to scientists involved or familiar with the study, this is both good and bad news. It's good news because the glacier plays a huge role in ice discharge in the northern hemisphere, but it's bad news because it confirms, ironically, that climate change is threatening the glacier in the long term.

The study was co-authored by 14 scientists, conducted from 2016 onward, and published on March 25 to the journal Nature Geoscience. The study was run via NASA's Oceans Melting Greenland (OMG) project, per National Geographic. According to the OMG site, the project aims to "pave the way for improved estimates of sea level rise by addressing the question: To what extent are the oceans melting Greenland’s ice from below?"

The glacier in question is the Jakobshavn glacier, which was decreasing in size at a speed of 1.8 miles in length and 130 feet in depth per year, according to The Associated Press. Now, scientists of the study say it's increasing at around that same speed.

Jason Box, a Greenland ice and climate scientist, said to The Associated Press, “[Jakobshavn is] arguably the most important Greenland glacier because it discharges the most ice in the northern hemisphere. For all of Greenland, it is king.”

Josh Willis, the lead scientist for OMG, explained to National Geographic why the recent growth of the glacier is cause for warning: the drop in water temperature around the glacier is reflective of a cyclical current pattern in the area of the glacier, not an indicator of climate change going away. He said, “The water is warming, too. Oceans are doing a huge part of the work in terms of driving Greenland's ice melt.”

The study’s lead author, Ala Khazendar, further clarified the concern. To National Geographic, Khazendar said, "All this is an indicator of how sensitive glaciers are to ocean temperatures."

In other words, when the water eventually begins warming again in that area, there's reason to believe glaciers will react dramatically to the change in water temperature, now that scientists are beginning to understand what a massive role ocean temperature plays in the process.

As for whether other factors might be impacting the glacier's growth in the last few years, Willis acknowledged that air temperature and snowfall could certainly have played a role. Via National Geographic, he said, "Warmer air will cause more melting and more ice loss. Colder air could cause less ice loss. But we know that what we saw was caused by the ocean because the slowing and thickening is concentrated right where the ice meets the water."

Willis concluded, "The thickening gets smaller and smaller as you move inland.”