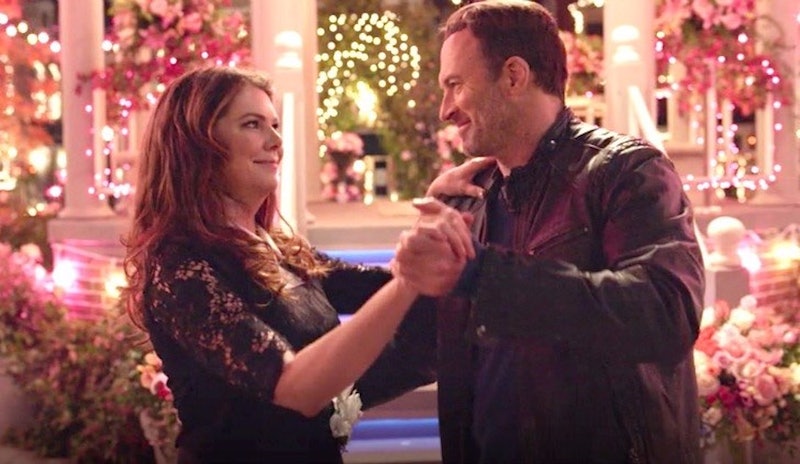 Whether you're Team Jess, Dean or Logan, it's safe to say none of Rory's boyfriends ever did anything as romantic as Molly Larimer's boyfriend of five years, Sebastian. Rather, fiancé since she definitely said yes to his Gilmore Girls wedding proposal in the Stars Hollow gazebo. Yes, it happened in the actual gazebo from the show, which as everyone knows is definitely the most romantic locale in the entire fictional town.

While on the Warner Bros. studio lot tour, they made a stop at the gazebo where Larimer got the surprise of her life. In a video Larimer shared on Twitter, she looks shocked when Sebastian gets down on one knee and she told Mashable that's because she most definitely was.

"We got to the Stars Hollow area and our tour guide had everyone get out of the tram and go walk toward the gazebo," the California native told Mashable. "We got up to it, and the guide asked us all if there were any big Gilmore Girls fans in the group, and my fiancé and I both raised our hands." It was then, Larimer said, that the guide asked the couple to go into the gazebo and do "an improv scene."

Of course, Larimer was the only one in this improv duo who didn't know what was going to happen next. In fact, she might have been one of the few people on the tour that didn't know what was happening. Watch the video with the sound on and you'll hear the person filming excitedly say, "it worked!" And oh, it totally did. The only thing missing from this proposal was a six-pack of Zima so they could toast just like Luke and Lorelai did after they got engaged.

In a tweet following the proposal, Larimer explained that "Gilmore Girls has always been one of my favorite shows." She loves it so much, she told Mashable, that she has a Rory tattoo on her arm. That's real commitment. "Sebastian planned the perfect proposal," she tweeted. "I’m so lucky and so happy to spend forever with him." Just like Luke at Rory's high school graduation, I'm blubbering and if you're not, I have to agree with Luke here, you're a freak.

As every GG fan knows the gazebo is not only the center of Stars Hollow, but also at the center of some of the show's most memorable moments. It's where Luke and Lorelai had their first date thanks to the annual picnic basket auction. Later, it would be the location of Luke and Lorelai's wedding in A Year In The Life. Unfortunately, Kirk wasn't able to work his magic on the gazebo for this proposal, but maybe this sweet gesture will help fans forget about that final A Year In The Life scene. You know, the one in which fans finally learned those much-talked about final four words that revealed Rory is pregnant.

Of course, those four words have fans split on whether it was actually worth the wait, but what most Gilmore Girls fans can probably agree on is that this romantic proposal was just what summer needed. Let's all raise a Zima to that.