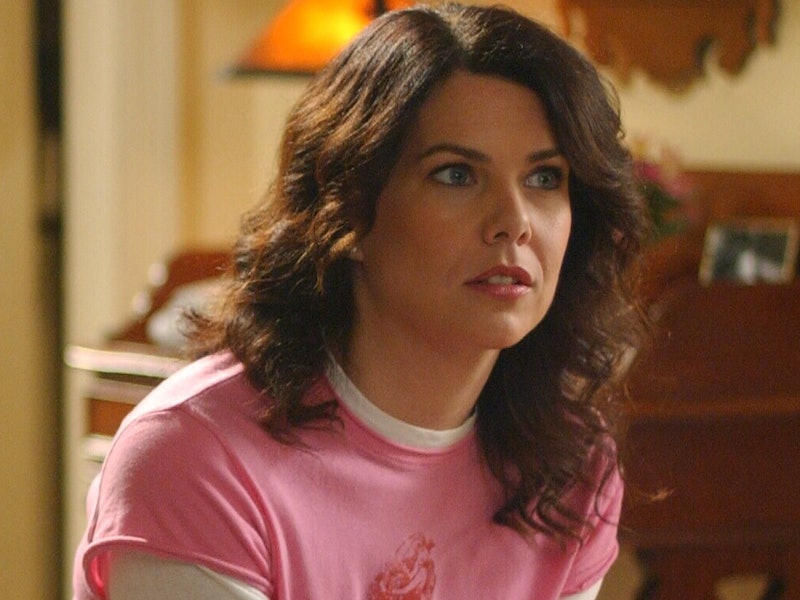 Amy Sherman-Palladino, historically, has not been the type of television series creator to drop spoilers willingly. Even before Internet fandom culture became a huge thing, Sherman-Palladino was all about keeping Gilmore Girls details under wraps. Something amazing happened during Entertainment Weekly's radio interview with Sherman-Palladino though — she revealed she had to force Lauren Graham to read the final revival script because Lorelai will be wearing an important costume that Sherman-Palladino needed to discuss with Graham. What kind of outfit could Lorelai possibly be wearing that needed to be discussed?

If your first thought is a wedding dress, then I am right there with you. What other "important costume" could it be?! At this point, a Gilmore Girls wedding is heavily rumored, and the recent reveal that Luke and Lorelai are likely together, but not married, puts the couple at the top of the groom and bride list. Sherman-Palladino knows how long fans have been craving a Luke and Lorelai wedding. As far back as Season 1, they were the couple almost everyone could agree were meant to be. The most logical conclusion to their story is a wedding, and knowing Lorelai, her dress would be a big deal.

She already picked out her dress to marry Luke in once back in Season 6, but the duo never made it down the aisle. Things have to be different this time around, and this important costume moment is hopefully a sign that Luke and Lorelai are on their way to a happy ending. And hey, if Lorelai's choice of a dress is unconventional then that's all the better. Lorelai is nothing if not a fashion risk taker.

As much as I want Lorelai's mystery outfit to be a wedding dress, this is Sherman-Palladino we're talking about, and she is not exactly a predictable person. Given that this outfit will appear in the final episode, "Fall," it could be a few other things. Halloween is in the fall, and Lorelai is a fan of the holiday so perhaps this is a literal costume with some significant meaning to Lorelai and the show. Then there are the Stars Hollow festivals to consider. The dance marathon takes place in the fall, and given how popular the Season 3 episode "They Shoot Gilmores, Don't They?" was, the revival might revive the festival to once again let some serious romantic moments play out for the Gilmore women.

Then there is the much sadder option of Lorelai donning a special outfit for the one year anniversary of Richard's death, which would likely be in the fall. The Gilmores could put together a gathering to honor Richard's love of literature or history — something unique to him that would require each person to wear an outfit that holds special meaning to Richard or to their relationship with Richard. Seeing Lorelai choose an outfit to wear to Richard's memorial could be a major moment depending on how much weight the revival puts on a memorial for the beloved Richard Gilmore.

For now, I'm standing by my wedding dress theory. This is clearly a major moment for Lorelai, otherwise Sherman-Palladino would not have had to discuss the actual costume with Graham beforehand. The discussion of the costume leads me to believe the costume itself is something out of the norm that is important to the plot. The only clothing major enough to warrant that level of discussion, in my mind, is wedding attire.

Lorelai could pull together a dress at the last minute, or update Emily's dress with a modern twist. Maybe she doesn't wear a traditional wedding dress at all, and she and Luke end up getting married in costumes that are iconic for them personally — matching flannel, perhaps? Whatever this costume is, it sounds like a big deal, and it is part of the final episode of the Gilmore Girls.

Until the revival lands on Netflix, all I can do is speculate, but Luke and Lorelai fans this costume news is a good sign that your Gilmore Girls wedding dreams may finally be coming true.