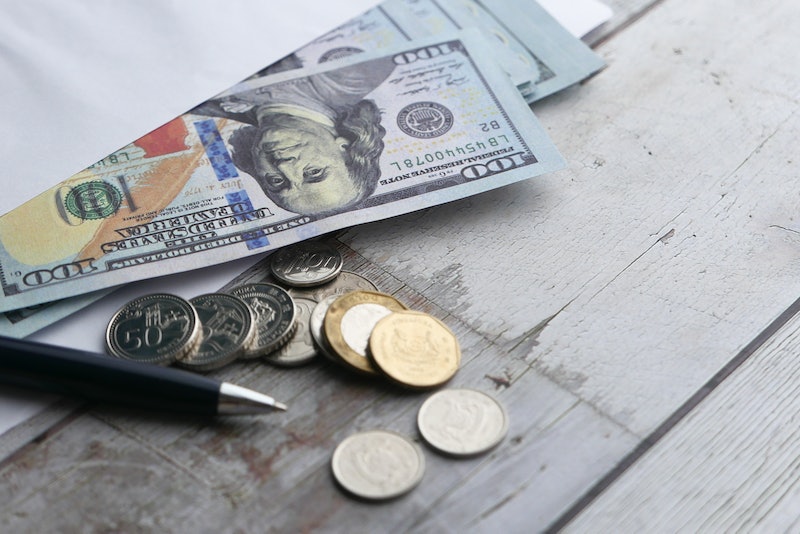 National conversations about raising the minimum wage, with many advocates pushing for a $15 an hour minimum, have some led some jurisdictions to raise their minimum wage to double the federal rate. Now, research shows that this increase may be tied with positive health effects. Suicide rates among low-income communities may be directly influenced by minimum wage, according to a new research from Emory University. The study, published in the Journal of Epidemiology & Community Health, found that a $1 increase in minimum wage lead to a 3.4% to 5.9% decrease in suicide. John Kaufman, a PhD student at Emory who led the study, says he hopes their findings will help lead to solutions for the rising U.S. suicide rate, as a decrease in suicide rates even by a few percent would save thousands of people. “If the suicide rate is reduced by even that much across the country, it could represent thousands of lives every year,” Kaufman tells Bustle.

“Suicide rates have been on the rise in the U.S., and those increases are actually accelerating,” Kaufman says. “So it's important for us to understand ways that we can try to help people out, especially people at higher risk.”

Past research has shown that suicide rates tend to be lower in high-income communities, and Kaufman says that may be because of an inverse relationship between depression rates and income. While researchers agree risk of suicide may be affected by socioeconomic status, not much is known about whether specific financial policies like minimum wage would influence it.

“If policymakers ... are interested in particular in helping out people that are already at higher risk of depression and suicide, this might be one way to do that.”

Kaufman recognizes that raising minimum wage isn’t a quick or easy political feat. The federal minimum wage, currently $7.25, hasn’t been raised in over 10 years, despite the fact that inflation has lowered the buying power of the dollar in that time. However, he says that that politicians should be thinking about just how much raising minimum wage might help individuals who rely on it.

“If policymakers are concerned about accelerating increases in suicide in the U.S., and are interested in particular in helping out people that are already at higher risk of depression and suicide,” he says, “this might be one way to do that.”

Like with any research, the Emory study acknowledged that there may be other variables that influence the relationship between these two factors, state to state. Kaufman notes that states that opt to raise their minimum wage may also have other social welfare programs that could contribute to lower depression and suicide rates. However, Kaufman says that past research has found similar relationships between income and suicide, and it’s something people in the United States should start paying more attention to. Raising the minimum wage has also been associated with higher rates of high school graduation and lower rates of unresolved medical issues, according to the American Public Health Association.

Kaufman hopes that his team’s findings help decrease the stigma associated with talking about mental illness and suicide. He also wants people to remember that the higher risk of depression and suicide that people in low-income communities face isn’t their fault. “These [problems] are not just up to individual people to figure out,” Kaufman says. “These are trends that have causes, and we can try to do things at a societal level to fix these kind of structural problems in our society.”

More like this
These Artists Are Reimagining Black History Month To Create A Better Future
By Katie Mitchell
25 Inspiring Quotes From Black Women To Celebrate Black History Month
By Kyli Rodriguez-Cayro and JR Thorpe
6 Organizations Fighting Police Brutality That You Can Support Right Now
By Syeda Khaula Saad and JR Thorpe
8 Charities To Donate To During Black History Month
By Alexis Morillo
Get Even More From Bustle — Sign Up For The Newsletter
From hair trends to relationship advice, our daily newsletter has everything you need to sound like a person who’s on TikTok, even if you aren’t.