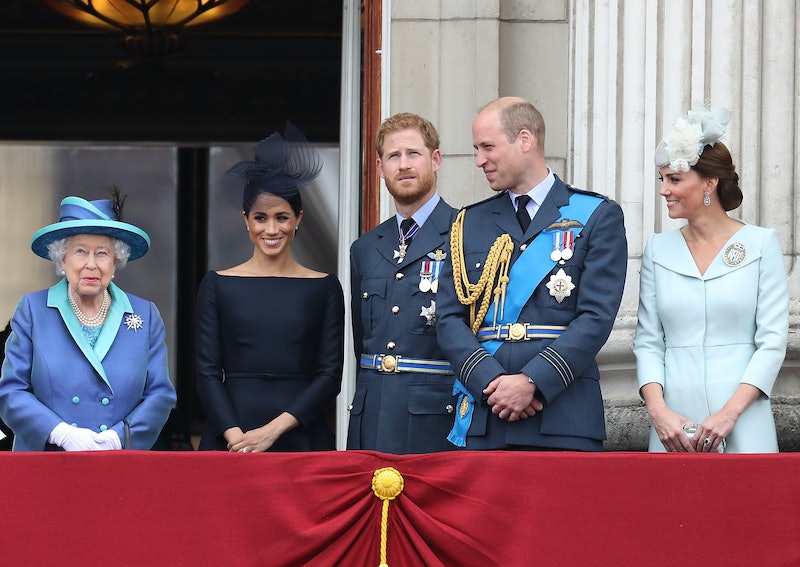 Prince Harry and Meghan Markle are suing the publisher of the Mail on Sunday, a statement revealed on Tuesday, after the newspaper published a private letter sent by Meghan to her father. But the Duke and Duchess of Sussex aren't the first members of the royal family to take legal action against the press, there's a history of doing so.

Prior to the recent news, the most prominent lawsuit involved Harry's brother. Prince William and Kate, Duchess of Cambridge, began legal proceedings against a French magazine in September 2012, per the New York Times, after it published photographs of Kate sunbathing topless in a villa. The couple's office likened the photograph publication to “the worst excesses of the press and paparazzi during the life of Diana, Princess of Wales, and all the more upsetting to the Duke and Duchess for being so.”

The complaint, however, did not conclude until five years later when a French court ruled that the photos were indeed an invasion of the couple's privacy, reports the Guardian. William and Kate's legal team had asked for 1.5 million euros in damages, but were awarded 100,000 euros (just over 90,000 pounds). The magazine's editor and CEO of its publisher were fined an additional 45,000 euros each.

But lawsuits between the British monarchy and the media occurred even before this. In November 2003, a Daily Mirror reporter managed to get a job at Buckingham Palace, per the BBC, using his undercover experience to write a story on the lack of security. Photographs from inside the palace were also published.

As the Evening Standard reports, the reporter lied on his application form and gave a fake reference yet was responsible for serving the Queen Elizabeth II and Prince Philip breakfast. The Royal Household quickly won a High Court order, reports the BBC, banning the newspaper from printing any more inside details. It also announced plans to sue.

But a few days later, the queen settled the legal action after the reporter and the newspaper promised not to disclose further information. They also paid 25,000 pounds toward the monarch's legal fees, notes the Telegraph.

Out-of-court settlements are common in this kind of scenario, states the BBC. In 1993, the publication reports the Sun paid 200,000 pounds to charity after leaking the queen's Christmas speech. In the same year, the Daily Mirror is said to have paid the same amount to charity, per the BBC, and a further 1 million pounds toward the legal costs of Diana, Princess of Wales, after publishing photographs of her in a gym. The Sun had already been forced to pay a breach of copyright settlement five years prior when the paper published a stolen photograph of Sarah, Duchess of York, and Princess Beatrice that was meant to be used on the royal family's Christmas card, reports the BBC.

One early case notably went to trial. In 1990, Princess Margaret's son, Viscount Linley, won 30,000 pounds in damages from former newspaper Today after it accused him of "rowdy behaviour in a pub", states the Telegraph.

Harry and Meghan's new lawsuit isn't their first, either. In May, Harry accepted "substantial damages" from a news agency that took and sold aerial photographs of his and Meghan's Cotswolds home, reports the Guardian. The incident forced the couple to move out, states the paper.

The recently announced legal action, however, is particularly noteworthy for being combined with a powerful statement. Prince Harry spoke of the "bullying" Meghan had endured from British tabloids, writing: "I have been a silent witness to her private suffering for too long. To stand back and do nothing would be contrary to everything we believe in." Any damages from the couple's lawsuit will be donated to an anti-bullying charity.