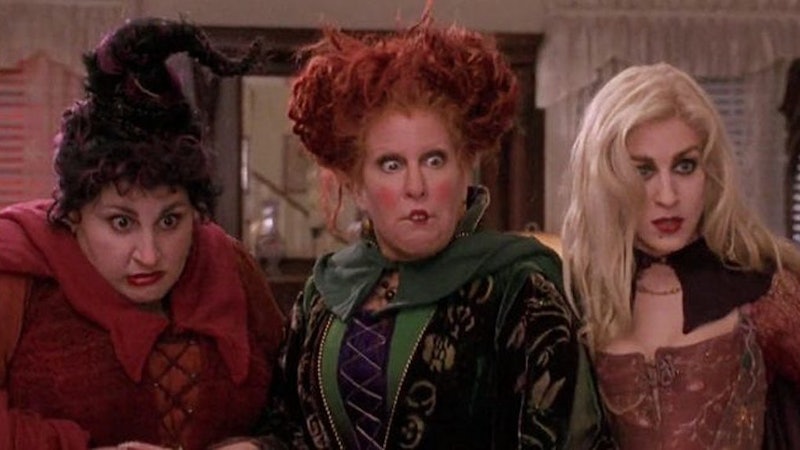 Come little children and Sanderson sisters fans, because apparently Disney+ is making a Hocus Pocus sequel written by Workaholics' producer Jen D'Angelo. Collider first reported the news on Oct. 23 and it sounds like there are high hopes for the original cast (Bette Midler, Sarah Jessica Parker, and Kathy Najimy) to return. Bustle has reached out to both Disney+ and reps for D'Angelo, but did not receive an immediate response.

According to Collider, the sequel is tentatively titled Hocus Pocus 2 and not only is D'Angelo writing the script, but she's also working on a way to bring back the original Sanderson sisters — Midler as Winifred, Parker as Sarah, and Najimy as Mary. The sequel of the beloved 1993 movie is reportedly in early development at Disney's new streaming service, which officially launches on Nov. 12.

Of course, fans might want to keep their excitement in check, as this isn't the first time reports of a sequel or reboot have circulated. In 2017, there were reports that Scarlett Lacy and original Hocus Pocus producer David Kirschner were making a remake for the Disney Channel. The rumored reboot also wasn't going to have Midler, Parker, and Najimy reprise their roles, much to fans' dismay. At the time, Deadline reported there would be a brand new cast and without original director Kenny Ortega. Following this news, Midler slammed the Hocus Pocus remake. She told People in October 2017, "I know it’s cheap. It’s going to be cheap!" Fans haven't heard any updates since.

That said, a sequel seems much more likely than a remake. The cast has reunited on many occasions, and even Midler has expressed interest in playing Winifred again. According to People, the actor and singer said during a Nov. 2014 Reddit AMA, "I have canvassed the girls and they are willing to do it, but we have no say in it." She added, "So if you want a Hocus Pocus 2, ask the Walt Disney company." During Watch What Happens Live With Andy Cohen in October 2016, Parker also said she'd return as Sarah. "I would love that," she said about a sequel. "I think we've all been fairly vocal about being very keen but that hasn't created any ground swell of movement."

Well, the original Sanderson sisters' wish might actually be granted. Hocus Pocus 2 hasn't officially been confirmed, but with the upcoming launch and excitement for Disney+, the streaming service would be a perfect home for the sequel.

More like this
'Friends' Star Maggie Wheeler Offers Support To Matthew Perry After Reading His Memoir
By Alyssa Lapid
The 'Scream 6' Trailer Shows Off Hayden Panettiere's Return & Ghostface In NYC
By Jack Irvin and Jake Viswanath
Anne Hathaway Shared A "Thrilling" 'Princess Diaries 3' Update
By Darshita Goyal
Mel B Thinks These Celebs Should Play Them In A Spice Girls Movie
By Alyssa Lapid
Get Even More From Bustle — Sign Up For The Newsletter
From hair trends to relationship advice, our daily newsletter has everything you need to sound like a person who’s on TikTok, even if you aren’t.