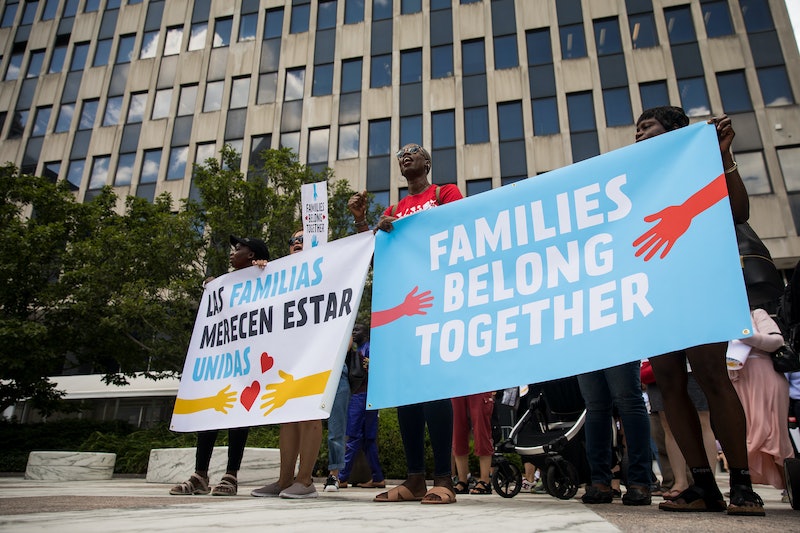 According to the Associated Press, a Honduran baby had his first birthday in a detention center in Arizona after being separated from his father when the two crossed the border. Now, five months after immigration officials separated Rolando Antonio Montecinos from his infant son Johan at the United States border, the two have finally been reunited.

Over 2,000 undocumented children have been taken from their parents and placed in detention facilities across the United States, according to the Department of Homeland Security. Rolando and Johan crossed the border earlier in the year and were immediately detained by immigration officials, according to the Associated Press; since then, their story has become a symbol of the human impact of the Trump administration's family separation policy.

The two were detained together for five days, Rolando says, and only on the third day was Rolando allowed to bathe his son. On the fifth day, Rolando was deported back to Honduras; he says that he agreed to voluntary deportation only because immigration officials told him that his son would be sent back with him. However, Rolando says he was told afterwards that Johan would be held for an additional two weeks before being deported. But months passed, and Johan remained detained.

Johan himself made headlines in early July when, as a one-year-old, he was ordered to appear before an immigration judge. The Associated Press reported that he "drank milk from a bottle, played with a small purple ball that lit up when it hit the ground and occasionally asked for 'agua'" in court, prompting the judge to remark that he was "embarrassed" to be presiding over the case.

Through a social worker in Arizona, Rolando and his wife Adalicia learned that Johan had crossed several infant milestones — including walking and speaking for the first time — while detained by immigration officials, according to the Associated Press.

The Trump administration rolled out its family separation policy in May to near-universal condemnation from Democrats and Republicans alike. After wrongly claiming that a Democratic-passed law required his administration to split up families, President Trump signed an executive order in June that reversed his administration's policy. At that point, however, over 2,000 undocumented children had already been separated from their parents — some of whom were deported while their children remained in the United States.

The ACLU successfully sued over the policy, and on June 26th, a judge gave the administration a deadline for reuniting the families that it has separated: 14 days if the children in question are younger than five years old, and 30 days for everyone else.

The administration, by its own admission, failed to meet that first deadline, reuniting fewer than half of the 102 children under five years old that it had detained. As of Thursday, the administration says it has reunited 364 children older than five with their parents — roughly 14 percent of the 2,551 children in that age range who've been detained.

On Friday, Johan was reunited with his family San Pedro Sula, Honduras. According to the Associated Press, he initially didn't recognize his parents, but then cried when his mother spoke his name.

More like this
How To Follow The New Royal Family Social Media Accounts
By Sam Ramsden
Prince Harry Explains Why He Feels Guilty For Meghan's Estrangement With Her Dad
By Jake Viswanath
Is Queen Elizabeth II Or The Royal Family In Netflix’s 'Harry & Meghan' Docuseries?
By Jake Viswanath
Archie & Lilibet Are Eligible For Royal Titles — But There's A Catch
By Jake Viswanath
Get Even More From Bustle — Sign Up For The Newsletter