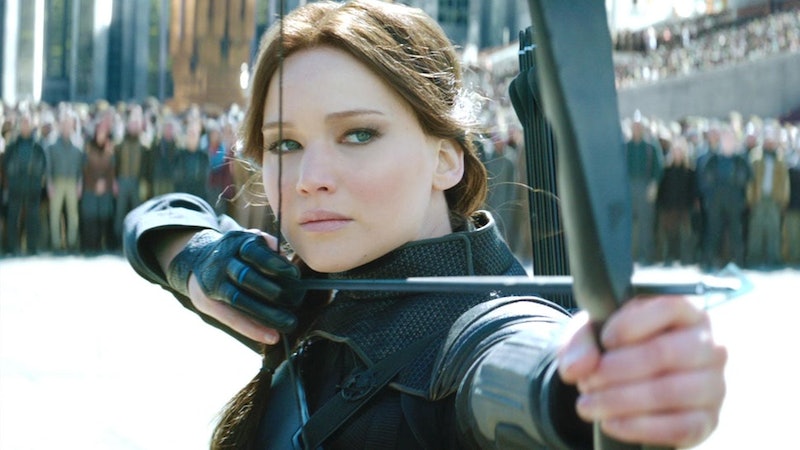 Great news, Tributes! Children's publisher Scholastic announced on Monday that a Hunger Games prequel book is coming in 2020. The as-yet-untitled novel will be the first book set in Panem to be published since the release of Mockingjay, the final book in the trilogy, in 2010, and some fans think it could center on the beloved character Mags. Here's what we know so far.

Suzanne Collins was already an established children's and young adult author when she published The Hunger Games in 2008, but that novel skyrocketed her to household-name status. The Hunger Games was a major trendsetter, letting loose a flood of dystopian YA novels and series that included The Maze Runner, Divergent, and The 5th Wave. Collins' trilogy also launched a four-movie series starring Jennifer Lawrence. The first film debuted in theaters in 2012.

The Hunger Games novels center on Katniss Everdeen, a teenager living in what used to be the U.S. and is now called Panem. Every year, the Capitol stages a televised, national fight to the death called The Hunger Games, for which two children, called Tributes, are "reaped" — drafted to participate — from their homes in each of the country's 12 districts. After her younger sister, Primrose, is reaped, Katniss volunteers to be one of the Tributes for District 12 in and participates in The 74th Annual Hunger Games in her stead, alongside Peeta, the son of a local baker.

Collins' new Hunger Games prequel takes place 64 years before Katniss first competes in the titular event, and some sharp Twitter users have pointed out that that time gap has special significance for at least one minor character in the original trilogy. Mags Flanagan, a District 4 victor who becomes one of Katniss' allies in Catching Fire, won the 11th Hunger Games, so it stands to reason that the prequel could begin in the year preceding her victory.

Where Katniss leads the successful Second Rebellion against the Capitol in Mockingjay, Mags was a small child when District 13's original rebellion — for which the Hunger Games are an ongoing punishment — was quelled. Set during the so-called Dark Days, Collins' new novel may focus on Mags as she prepares to compete in her first Hunger Games.

But that's just a theory! Suzanne Collins and Scholastic have yet to release more details about the prequel, but fans can expect it to hit bookstores on May 19, 2020.