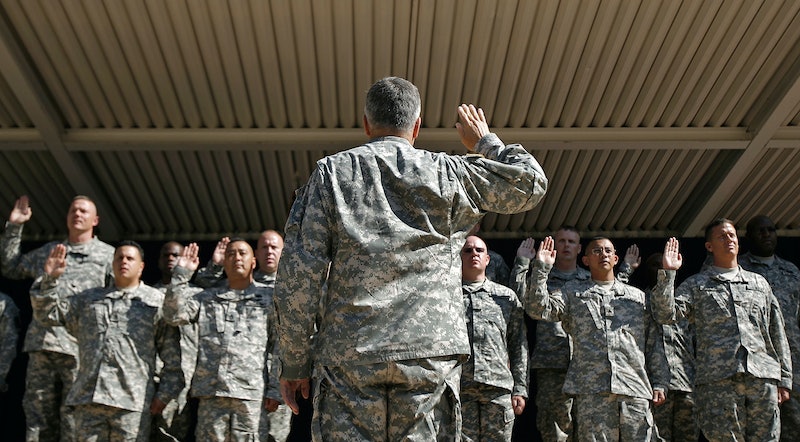 While women have been able to serve in all military combat roles since 2015, they've long remained barred from registering for the draft. Under the Military Selective Service Act, only U.S. male citizens and men residing in the United States age 18 to 25 are legally required to register with the Selective Service System for potential military conscription. All that could change, however, after a federal judge ruled the male-only draft unconstitutional.

"While restrictions on women in the military may have justified past discrimination, men and women are now 'similarly suited for purpose of a draft of registration for a draft,'" U.S. District Judge Gray Miller wrote in his opinion, quoting from the Supreme Court opinion issued in Rostker v. Goldberg in 1981.

In his own ruling, issued late Friday, Miller ruled that the Military Selective Service Act's male-only registration requirement violated the Fifth Amendment's due process clause. What's more, he argued in his ruling that "if there ever was a time to discuss 'the place of women in the Armed Services,' that time has passed."

According to USA Today, Miller's ruling represents "the biggest legal blow" dealt to the Selective Service System since the Supreme Court opted to uphold the draft's requirement in Rostker v. Goldberg. At the time, the Supreme Court ruled that "the fact that Congress and the Executive have decided that women should not serve in combat fully justifies Congress in not authorizing [women's] registration, since the purpose of registration is to develop a pool of potential combat troops."

The majority of combat posts were opened to women in 2013 by then-Defense Secretary Leon Panetta. However, according to the Selective Service System, it wasn't until late 2015, when then Defense Secretary Ash Carter denied a Marine Corps request to bar women from certain infantry and ground combat jobs, that all combat posts in the U.S. military became fully opened to women.

While the Selective Service System has said its existing infrastructure is capable of registering and drafting women if the agency were to be given "modest additional resources," it's unclear if Miller's ruling will result in a change to the draft. According to USA Today, Miller's ruling was issued as a declaratory judgment rather than an injunction. Declaratory judgements are often thought to be more mild than injunctions as it doesn't include a sanction or order for action.

Still, lawyers for the men's rights group responsible for bringing the lawsuit against the Selective Service System have said the ruling could have real-life consequences. "Yes, to some extent this is symbolic, but it does have some real-world impact," Marc Angelucci, attorney for the National Coalition For Men, told USA Today. "Either they need to get rid of the draft registration, or they need to require women to do the same thing that men do."

In a press release issued by the National Coalition For Men, Angelucci called Miller's ruling "long overdue" and claimed the male-only draft represented "decades of sex discrimination against men."

"Even without a draft, men still face prison, fines, and denial of federal loans for not registering or for not updating the government of their whereabouts," he said. "Since women will be required to register with the Selective Service, they should face the same repercussions as men for any noncompliance."

According to the Selective Service System, failure to fully comply with the Military Selective Service Act is considered a felony punishable by up to 5 years in prison and/or a fine of up to $250,000. What's more, failure to register makes one ineligible for federal and state student financial aid, federal employment, security clearance, and even U.S. citizenship for immigrant males.

A congressionally mandated committee — the National Commission on Military, National and Public Service — has reportedly been looking into ways to potentially change the Selective Service System since 2016. According to Task and Purpose, however, their final report is not expected to be handed in until March 2020.