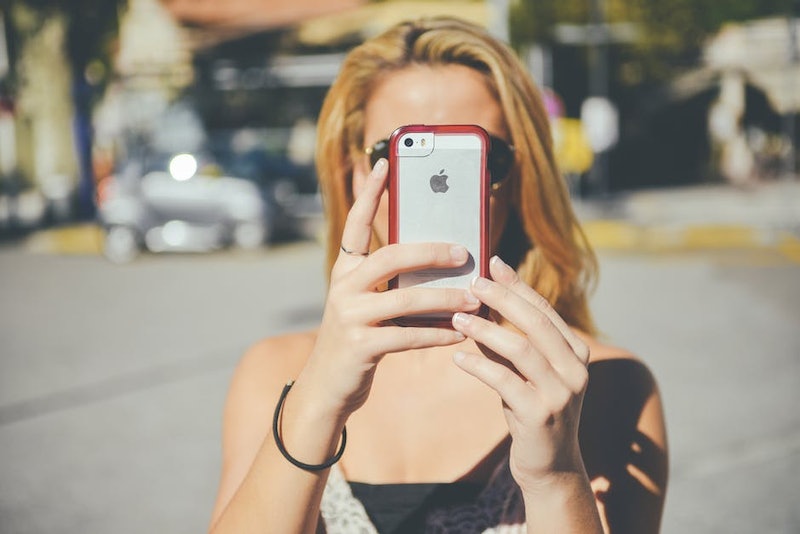 Our social media posts can be a reflection of who we are and how we feel — that's a given; but new research shows that the connection runs deeper than we maybe realized: your Instagram pictures can reveal if you're depressed, based on factors like how you edit them and what filters you tend to use.

The study was published in EJP Data Science, and it used Instagram data from 166 people and 43,950 different photos to apply tools to identify markers of depression. Researchers found that when editing photos, healthy individuals used darker colors to express negative moods, but generally preferred brighter colors instead. Depressed people, however, preferred darker, grayer colors. Similar results were found when it came to the use of filters. Depressed people often used the black-and-white filter Inkwell, or no filter at all, while healthy individuals frequently used Valencia, which lightens the tint. "In other words, people suffering from depression were more likely to favor a filter that literally drained all the color out the images they wanted to share," the study says.

The researchers' tools to identify depression in Instagram posts were so strong that they outperformed general practitioners' average success rate in diagnosing depression, and, interestingly, they were able to detect depression in images posted before the individuals were ever diagnosed.

These results are fascinating, to say the least, and also indicative of something bigger: if these tools and markers were more accurate than the work of a GP, could this be used as a method of early screening and detection for people possibly suffering from mental illness?

This isn't the first time science has looked at the relationship between social media posts and mental health. In 2011, researchers studied the Facebook profiles of 200 students from the University of Washington and the University of Wisconsin-Madison. They found that 30 percent posted statuses that satisfied the American Psychiatric Association's criteria for symptoms of depression — fitting, considering other studies have found that roughly 30 to 40 percent of college students suffer from depression.

Other research examined Facebook statuses and found correlations between the words "f*ck," "pissed," and "bloody," all three of which reflected high levels of hostility and aggression. Additionally, "hate" and "lonely" were related to negative social relationships. Parallel with seasonal depression, the frequency of these words increased during the winter months.

While excessive social media use has been tied to depression, anxiety, problems with self-esteem, loneliness, and body image, it's safe to say that it's here to stay.

And if we're going to spend so much time with it, and if researchers can so accurately use it to detect potential mental health issues, why not develop it as a tool to help people who might be struggling?

More like this
11 Super Bowl Instagram Captions To Use On Game Day — Even If You Don’t Like Sports
By Alexis Morillo
Ashamed Of Your Screen Time Stats? Here's How To Change That
By Alexis Morillo
5 Signs You Have A Toxic Relationship With Yourself
By Lexi Inks
Flip Phones Are Gen Z's Favorite New Nightlife Accessory
By Maria Santa Poggi
Get Even More From Bustle — Sign Up For The Newsletter
From hair trends to relationship advice, our daily newsletter has everything you need to sound like a person who’s on TikTok, even if you aren’t.