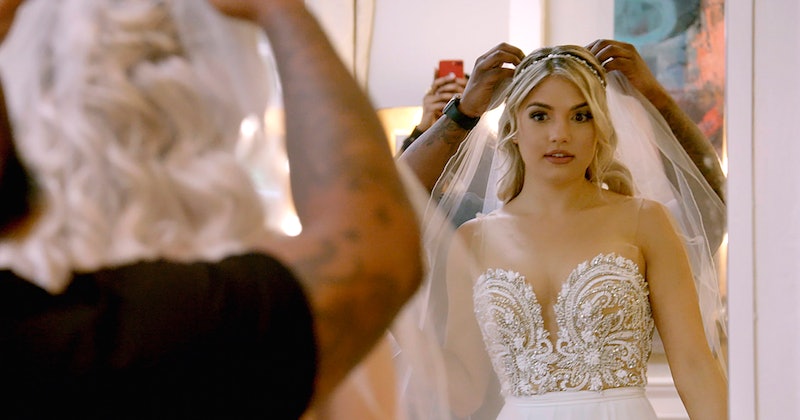 Love Is Blind has dominated every single one of my group chats since it launched on Netflix. Here I was thinking nothing would ever top Love Island in the finding love genre of reality TV, but then this series came along. The show follows total strangers as they date and propose without ever seeing each other, before getting married after only knowing each other a month. However, not all of the couples' journeys to matrimony runs smoothly. And amid the drama of Giannina and Damian's wedding day, eagle eyed fans spotted a possible mistake. A Love Is Blind producer explained the disappearing mud on Giannina’s wedding dress and the backstory is actually very sweet.

Love Is Blind was pretty shocking from the very beginning. However, one of the biggest twists was Damian Powers leaving his wife-to-be, Giannina Gibelli at the altar. It was seriously high drama as viewers watched the bride run away from the venue, before stumbling and sliding down a muddy bank outside. Unsurprisingly, the fall left her white wedding dress a little dirty. However, when she returned to confront Damian, her dress appeared good as new. While some fans put this down to a continuity error, a producer from the show revealed there's actually much nicer explanation.

In an interview with the Metro Chris Coelen said, “[Giannina] went back into the house with her mum. She was stewing, steaming, and destroyed emotionally. Her mum, as you can tell, is this caretaker type person. She and her mum were upstairs in the bridal suite, her mum is cleaning her up. She’s cleaning her dress like, 'You can’t have this.' Her mum cleaned her up, we didn’t clean her up, and then ultimately she decided she wanted to confront Damian, so she did.”

When you watch the wedding that wasn’t meant to be unfold it seems like it all happens very quickly, but Coelen pointed out that when Giannina returns you can see chairs are starting to be put away. He said, “What you see, and what we’re able to show on the show, is a condensed version of what happened. The run out of the venue, down that driveway, out into the parking lot next door… no one expected that. She was out there for half an hour with her mum in that parking lot; 45 minutes, maybe even an hour, that’s a long time.”

So it sounds like in her moment of need Giannina’s mum was on-hand with some motherly wisdom and epic stain removal skills. It’s little surprise that producers had trouble picking what to air and Coelen told Metro, “We could have done a three-hour special just on the Gigi and Damian wedding, truly. We only have so much time to tell a story. I love that people have been curious about all the little details.” He continued:

“There was incredible footage with Gigi and her mum, Damian and his friends, incredible stuff that we didn’t have time to show on the show.”

Giannina became a massive favorite among some viewers as she really knew how to amp up the drama. I’m just gutted that all the unaired drama from Ginnina and Damian's big day will almost certainly never make it to Netflix.