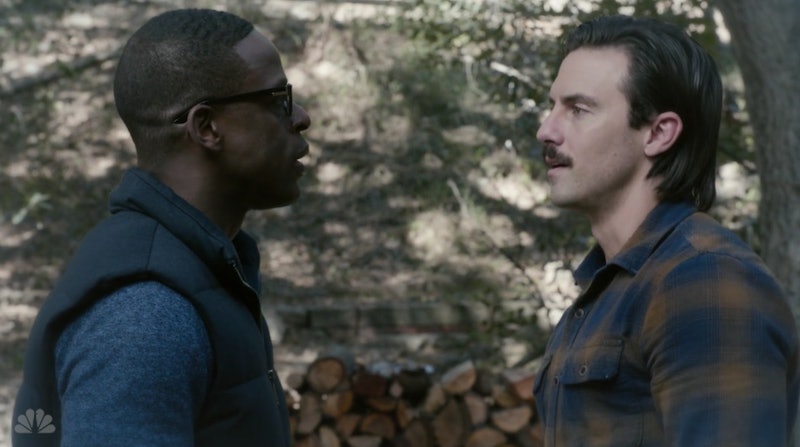 Dan Fogelman changed the whole game when he had This Is Us do a flash forward at the end of the Super Bowl episode. All of a sudden, a show that existed only in past and present timelines was open to going into the future. And, with that kind of freedom for the plot, more timelines could easily be explored. For example, my This Is Us theory about an alternate timeline episode where Jack never dies could conceivably happen — mostly because Milo Ventimiglia hinted that it would.

The actor behind Jack recently read fan tweets aloud for an Elle magazine video and one of them was mine. "Where's my alternative timeline episode of #ThisIsUs where Jack never dies and we get to see him be an adorable grandpa," my tweet reads. It was typed out of a desire to move on to happier things after Jack's death episode left me (and countless other fans) devastated. All Jack wanted to do was be a great dad, and he'd be the best grandpa to Randall's kids (and eventually Kate and Kevin's if they have any). But, my wish may have legs outside of my own selfishness. Ventimiglia's response to my tweet was telling in that he didn't say anything at all. But, his face said it all for him.

First he seems to look to the side (maybe to a publicist) and then decides to keep his mouth shut. Did he want to confirm, but he wasn't allowed to give that plot point away?

Then Ventimiglia pretty much gives the possibility away, anyway, with a simple raise of his eyebrows.

COME ON, how is that not him telling me directly that, yes, we will see Jack alive again in the present or future? This show is all about devastating twists, and there's nothing more devastating than giving viewers a glimpse at what could have been if he hadn't gone back in the house that fateful fiery night.

It wouldn't even be the first alternate reality scene to happen on the show. In Season 2's episode "Number Three," viewers see an alternate timeline where Randall's birth father William came to find Randall when he was 10 and then had a role in his life going forward — instead of the shortened relationship they got when he was old and already dying.

It also wouldn't be the first time the show suspended disbelief to bring Ventimglia forward in time. In the Season 1 episode "The Trip," adult Randall accidentally takes drugs and he hallucinates that his father Jack is at a cabin with him. In traditional Jack fashion, he gave Randall a pep talk to let him know that Randall was wanted as a child — even if his birth father hadn't been able to raise him.

Because he doesn't often get to work with the adult actors on the show (with the exception of Mandy Moore), Ventimiglia told Glamour that he relishes the time he does get to. "I'm completely enamored with my cast, so [the idea of doing more scenes with the adult actors] is really exciting for me. Those days are like any day on this show — days that I really look forward to," he said.

And, he might soon get that chance given what creator Fogelman told Glamour when asked whether Jack could ever return to present day via a dream sequence. "We play with a lot of things around time and memory and what could have been, so I think that’s definitely a possibility," Fogelman said. "There’s a lot of emotions [about that idea] because if you’ve lost someone tragically, you dream about them a lot. There’s a lot of different ways that can happen."

One of the ways that could potentially happen is via an alternate reality episode where Jack doesn't die in the fire and we get to see how his life would have played out in the future. Fogelman told Entertainment Weekly that more flash forwards are coming and that he intended to have “more and more adventurous stuff with our storytelling and structure" as the series developed. What's more adventurous than imaging a scenario that never got to happen?

It may not remedy the sadness of knowing Jack didn't survive to see his kids grow up — but if, for an hour, fans get to see how things would have been different with him there, that may be just heartbreaking enough to work for this beautiful, torturous show.