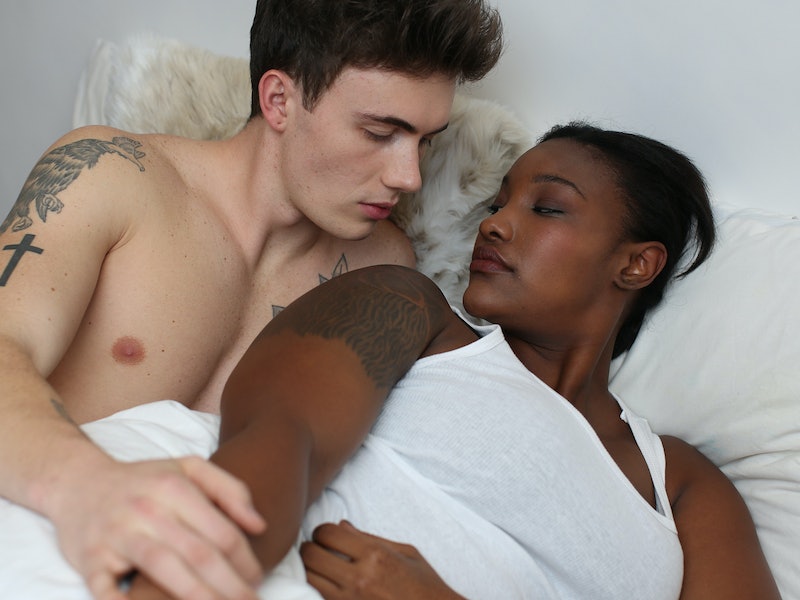 It's about damn time. A new birth control product is set to be trialled in the UK — and this one is for people with an actual human penis. That's right, men could be having to deal with birth control rather than women, which would be a glorious day indeed. The male birth control being trialled is a contraceptive gel called NES/T, which is hormone treatment that would aim to reduce sperm production to effectively zero, while leaving the libido intact. It's definitely still in its infancy — couples are being recruited in Manchester and Edinburgh in the UK and will be asked to use the gel as their only means of contraception for a year. It may be a while before it passes the trial phase and hits shelves, but it's still a very exciting prospect.

How effective could this new male birth control method be? Well, they're aiming high. "We’re aiming to get it down to the sort of level you get with the pill which is a very small but not zero failure rate,” Richard Anderson, a professor of clinical reproductive science at the University of Edinburgh, who is leading the study, told the Guardian. That's significantly higher than condoms, which currently fall at about 82 percent efficacy in real-life conditions (because we don't always use them as properly as they should be used).

Even though a male birth control gel sounds very different than anything we've seen before, it actually works in a way kind of similar to the pill. It contains progesterone which tells the brain’s pituitary gland to essentially shut off sperm production. Because progesterone can also have negative side effects in men due to a drop in testosterone, the gel also contains testosterone to counter-balance those effects.

If the idea of rubbing some gel into your balls before sex doesn't seem very sexy, don't worry — the gel is actually rubbed into the shoulders and upper arms daily, allowing it to be absorbed into the bloodstream. Participants in the trial will be given in the gel in a little pot the dispenses certain doses, so don't go overkill and just use it as a massage gel all over you. Also, if you're thinking, "Wait a minute, women have been putting copper effings coil into their vaginas and men get an actual shoulder rub as birth control?" You're not alone. You're definitely, definitely, not alone.

If you remember the contraceptive shot for men that was being trailed a while back, this is actually from the same team. That trial was stopped by the World Health Organization because of side effects like acne, because apparently, the World Health Organization doesn't want men getting pimples but is fine with the dozens of side effects of the female pill including, you know, death. Despite the side effects, Anderson insists that three-quarters of the men in that trial said they would use the injection if it was an option, so there's definitely a market, in both women and men, for a male birth control method. Especially if it is a lot less invasive than many of the things women put themselves through — coils, implants, and the like.

Many of us struggle to find a birth control that works, so any alternatives are welcome — especially if there are some male birth control options available. I'm obviously all for scientific advancement but, as much as this trial is exciting, where the eff were the shoulder rub gels when women were getting birth control options? Just sayin'.