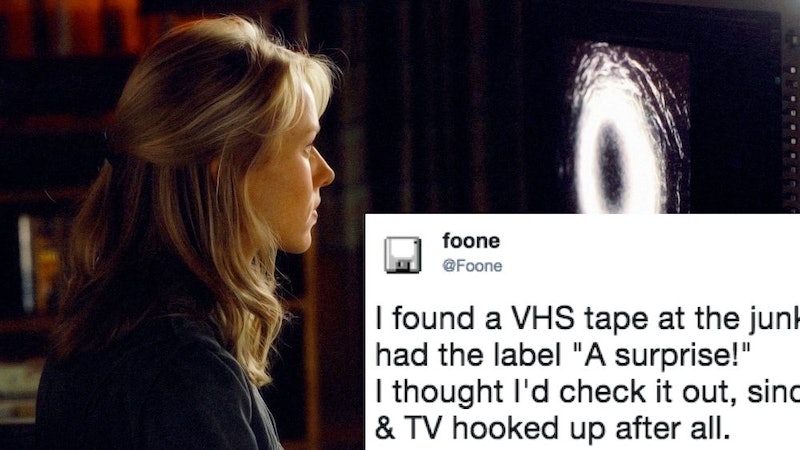 Picture this: you're at a video store perusing the aisles for a copy of your favorite rom-com, when suddenly you encounter a mysterious VHS in a sleeve that reads "A surprise :)". Now, you've watched enough horror movies to know the absolute LAST thing you should do is play that tape. Best case scenario it shows something gross or disturbing, worst case you'll die seven days after viewing it, as happened in the 2002 film The Ring. Naturally the unfortunate soul who found the video didn't heed such caution (or else I wouldn't be writing this article). When Twitter user @Foone found himself in this exact predicament this past Sunday, he chose the more daring approach. So, what do you do when something out of the ordinary happens to you in 2018? Tweet about it.

The video opens with a shot of an old-fashioned television (from 1976, @foone noted in a follow up tweet), equipped with a VCR. A can of orange soda sits in front of the device, to the left. A hand — presumably belonging to the user behind the Twitter account — enters the frame from the right, and displays the VHS tape for the camera, it focuses on the label. The hand removes the VHS tape from the sleeve and turns a knob on the television to power it up. He inserts the tape, the screen darkens, then a figure appears.

It's Rick Astley. The 1.2 million viewers of this tape — and @foone himself — have been rick rolled, albeit elaborately.

After the entire tape rolls and "Never Gonna Give You Up" concludes, Twitter user @foone ejects the tape, grabs it, walks away from the television and puts that thing right where it belongs: in the garbage.

For those familiar with the complex, niche humor of internet memes, this is likely not the first time you have seen a video for Rick Astley's 1987 hit play unexpectedly. The bait-and-switch, known as "Rickrolling", according to Know Your Meme, has evolved into somewhat of a competition to see how elaborate one can make the setup before playing the music video. The goal is for the result to be unexpected, and leave the viewer face-palming for falling yet again for the stale prank.

People tricked by the video on Twitter reacted pretty much the way you would expect, with a mix of disdain for their credulousness and allusions to spreading the curse of The Ring. Many viewers also replied to the video with concern about the heavy breathing that can be heard. @foone explained he is recovering from a cold and that carrying the television was more difficult than anticipated. If you ask me, it adds to the dramatic effect.

Like most memes, "Rickrolling" has become so commonplace for the internet-savvy it's difficult to determine where exactly it originated. In reality, "Rickrolling" originated on an imageboard website, according to Know Your Meme. A user posted a link that supposedly led to a trailer for a new video game, but in actuality it led to the same clip you just saw on the mysterious video tape. Like all good things on the internet, the video then went viral and people began rickrolling whenever the opportunity presented itself. In 2009, online tech publication Wired named rickrolling one of the better beginner-level hoaxes.

With the explosion of meme culture in the past few years, rickrolling has faded into the background a bit. But many are bound to think of the meme as their introduction into unconventional internet humor. Rickrolling is the dad joke of the meme world — it's annoying and anything but malicious (a refreshing and undervalued attribute nowadays).

Depending on where you look, there are parts of the internet that have some pretty shady stuff. Evan in the wild word of the world wide web, it feels good to know someone is never going to run around and desert you. The best part? That person is alway there when you least expect it.