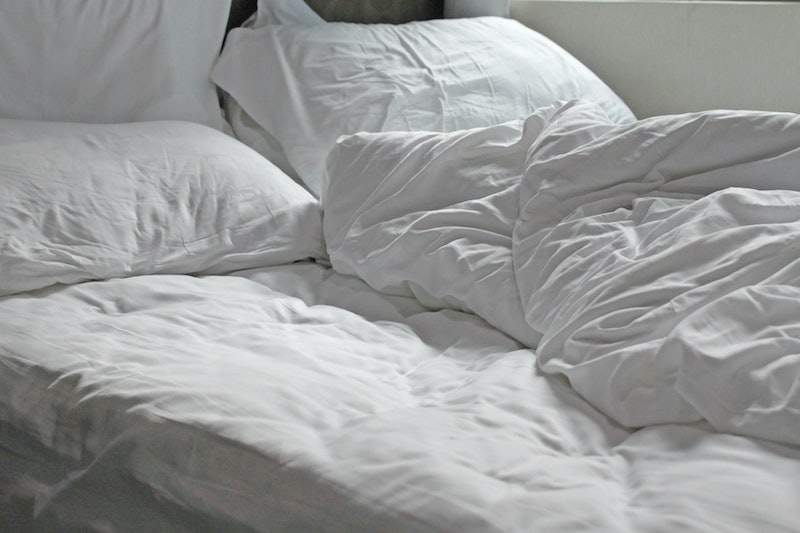 In nearly every season of the year, you might find yourself accosted by various allergens, whether environmental- or food-based. If you've bought yourself new bedding lately, though, you might also want to make sure you're not allergic to bird feathers. In some cases, an allergic response to non-synthetic duvets may give you "feather duvet lung," a disease that causes lung inflammation called hypersensitivity pneumonitis (HP), Gizmodo reports.

A new case study, published in the journal BMJ Case Reports, documented the story of a 43-year-old man who replaced his synthetic bedding with a feather-based duvet and pillows. For months, the man combatted dizziness, breathlessness, and fatigue, not suspecting that his new bedding was to blame. If his doctor hadn't further inquired into his recent purchase and lifestyle history, the report concluded, the man might not have received proper diagnosis and treatment. Eventually, lab testing confirmed that the man had developed HP, which normally affects people who work closely with birds (which is to say it's incredibly uncommon, affecting less than three out of every 100,000 people a year).

The disease emerges when people have a severe allergy to antigens from birds, according to a 2003 study published in the journal Medical Science Monitor. Antigens are foreign substances that induce immune responses in the body, and in the case of people with HP, that reaction can be very intense and present like a lower respiratory tract infection.

The man in the study slept in his bed consistently for months and therefore developed symptoms that made it look like he actually worked with birds in his daily life. This sensitivity, though, is not detectable by typical allergy tests, according to the case study. This is partially because people's immune responses are not instantaneous, and some people who are triggered by the bird antigens never actually develop symptoms.

According to the American Lung Association (ALA), HP symptoms are similar to the flu, with dry coughing, chills, fever, and tiredness being some of the most common. The best treatment, the ALA says, is removing the source of bird dust that gets into your lungs, e.g., switching from a feather duvet to a synthetic one.

In order to do this, you need to be able to identify the cause of your symptoms. If you're noticing flu-like symptoms, especially outside of regular flu season, the ALA advises that you get checked out by your doctor, who can give you a chest x-ray or lung function tests to determine your diagnosis. Since the allergy may not manifest right away, tracing your lifestyle history back at least a few months is important to help your doctor figure out what's wrong.

Tracing these changes will help you determine if you've come across any bird-related allergens that might be reacting poorly with your lungs. You might want to weigh the delightful softness of feather-based bedding with the risk of being severely allergic when you're selecting a new bedspread to help you battle the upcoming winter.

More like this
6 Abortion Advocates To Follow On TikTok
By Sara Youngblood Gregory
The UK Abortion Laws In 2022, Explained
By Sophie McEvoy
How To Protect Your Digital Privacy If You Need An Abortion Post-Roe
By Kaitlyn Wylde
The Best Underwear For Sensitive Skin, According To A Dermatologist
By Alexa Vazquez
Get Even More From Bustle — Sign Up For The Newsletter