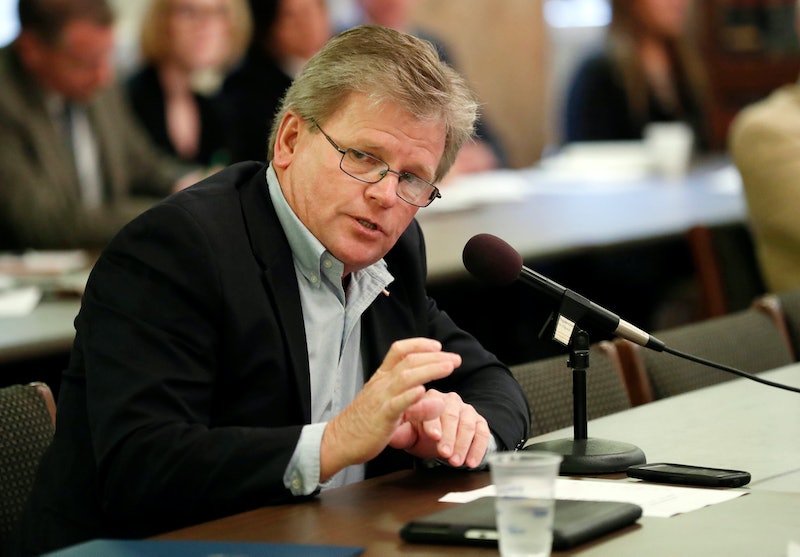 According to a police report, on Saturday evening, a Mississippi state lawmaker was arrested after allegedly punching his wife in the face because he thought she was not undressing quickly enough prior to sexual intercourse, HuffPost reported. The Republican state representative, Doug McLeod, was released from jail on Sunday after posting bail, according to the outlet.

As Biloxi's Sun Herald described based on information from a George County Sheriff’s Department investigative report, McLeod was intoxicated when he allegedly struck his wife, which caused her to bleed from her nose. The paper noted that, after the alleged incident, McLeod's wife sought refuge in the room of another woman who resides in the couple's home — and McLeod threatened to kill the woman's dog if she didn't open the door to let him see his wife. The outlet added that deputies at the scene described both women as being "frightened."

The Sun Herald reported that McLeod's wife declined to take an ambulance to seek medical treatment at the time, but assured officers that she would go to the hospital on her own. McLeod was charged with misdemeanor domestic violence and paid $1,000 to secure his release on bail, according to the outlet. Bustle has reached out to McLeod's office and the George County Sheriff's Department for comment.

Several state officials have already called for McLeod's resignation in the wake of the allegation. For example, state Senator David Blount wrote that "Rep. McLeod should resign" on Twitter on May 21. House Speaker Philip Gunn also said that he believes McLeod should leave his office.

“I have attempted to contact Rep. McLeod to request his resignation, if in fact, these allegations are true," Gunn told the Sun Herald in a statement. "These actions are unacceptable for anyone.”

As Fox 28 News reported, McLeod has been a Mississippi state representative since 2012, serving the George and Stone counties. The outlet added that McLeod is up for reelection this year and is currently running unopposed. According to Ballotpedia, McLeod plans to participate in the state's Republican primary on Aug. 6 and if he wins, the general election on Nov. 5.

McLeod has a history of supporting staunchly conservative legislation, with the American Conservative Union Foundation listing him among the state representatives receiving an "Award for Conservative Achievement" in its 2016 Mississippi ratings. Recently, McLeod and 23 other Republicans co-sponsored a bill to ban abortions in Mississippi after a so-called "fetal heartbeat" is detected, Vice reported.

As HuffPost described, the term "fetal heartbeat" is medically inaccurate, as the "heartbeat" detected at five or six weeks of pregnancy is actually pulsating of tissue that's beginning to form a heart, not the beating of a fully formed heart organ. Moreover, the outlet added that the presence of cardiac rhythms doesn't necessarily mean the fetus is going to be viable in the long term. That Mississippi bill was signed into law on March 21, CNN reported.

As McLeod's arrest continues to receive widespread attention, it remains to be seen whether the representative will comment publicly on the matter — and if he will remain in office.