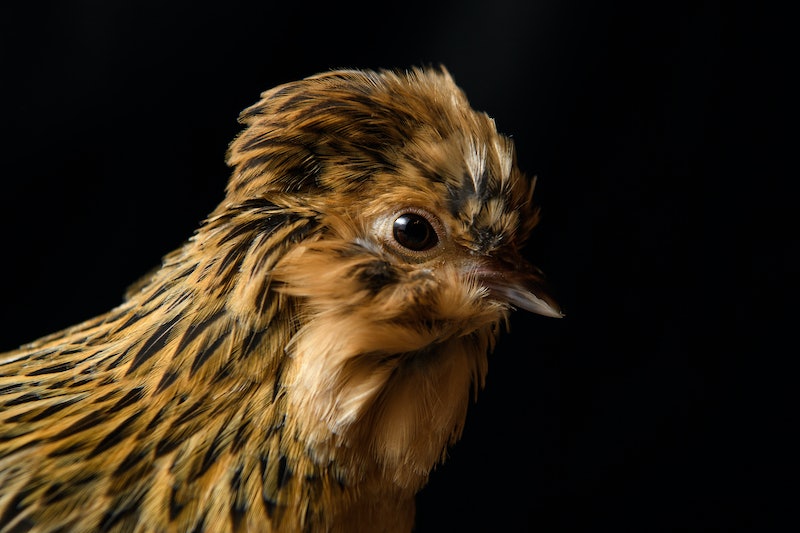 In news that is not-at-all horrifying and completely makes sense: Missouri State representative Mike Moon beheaded a live chicken on Facebook and ripped out its heart to try and make a statement about promoting abortion restrictions. Equal parts narration, theatrics, and preaching, Moon, a Republican state representative from Missouri's 157th district, discussed the upcoming second special legislative session called by Governor Eric Greitens to focus on adding more of those anti-choice restrictions.

"When the governor called for the second special session this year, I was right in the middle of my summer job," Moon began — referring to the chicken-beheading business, judging by the upside-down critter dangling in the frame.

"But like any good career politician, when I get the call," he continued, cutting the thing's head off and letting its wings flap. "I’m going back to work."

(Sincerely, from the bottom of my heart: Yikes. I'm not embedding the video because heck-no-oh-my-god, but you can watch it here if you've got a stomach of steel.)

However, this pageantry did serve a purpose (for Moon, at least). As he insisted that he and his colleagues are going to "get to the heart of the matter" (notably said while handling the heart of that chicken) and work toward ending access to abortion in the state of Missouri.

While this farm fresh, free-range display of anti-abortion extremism is bizarre as heck, it falls in line with Moon's general legislative aesthetic. Since taking office in 2013 he's supported so-called "personhood bills" that would alter the state constitution to count fetuses as people from conception, sponsored a 20 week ban on abortions in the state, and tried to set up a "history of abortion" exhibit in the state capitol (likening legal and safe abortions to the holocaust).

Such is his holy right and mission as a man, apparently. As Moon (notably not a subway station preacher, but pretty dang close) said in his video:

God gave us man dominion over life. He allows us to raise animals properly and care for them and then process them for food so we can sustain life. And that’s what I’m doing here with this chicken. So we’ve been called back to this special session for the primary purpose of supporting life, protecting the unborn specifically.

Meanwhile abortion activists in the area have promised that they're not swayed by the barnyard horror and are more concerned over the legislative horror for uterus-owning people in their state. As Alison Dreith, executive director of NARAL Pro-Choice Missouri told the Missouri Times:

Whatever Mike Moon does with a chicken in the privacy of his home is his own business. But we will not let him use the rights of women across Missouri as some kind of political prop. His call to ban abortion is disturbing and dangerous, no matter what he does with that chicken.

Missouri is already a state with its fair share of restrictions to abortion access. According to the Guttmacher Institute, the state already only allows private and state health exchange plans to cover abortions if the person's life is endangered, prohibits telemedicine to administer medication abortions; denies public funding for abortions unless it's a case of life-endangerment or incest, blocks abortions after viability except in cases of life-endangerment, and requires people seeking abortions to receive state-directed counseling and wait 72 hours before having their procedure.

So, for all the clucking over the chicken video, the emergency session aimed at adding even more restrictions is nothing to laugh at.