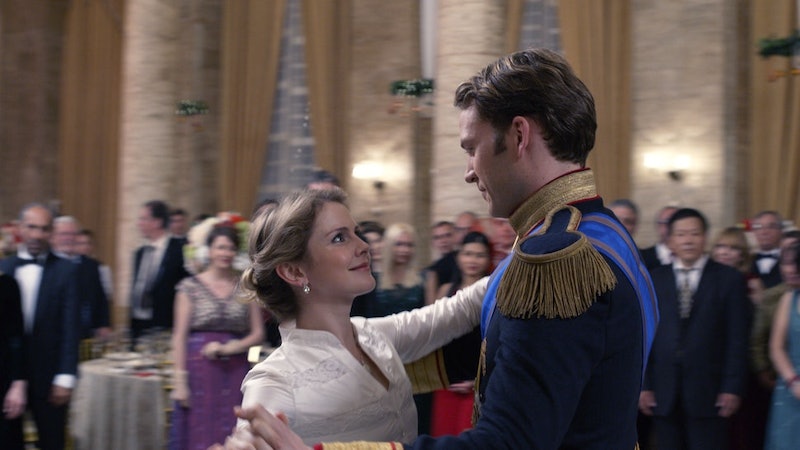 It was Nov. 2017 when the world was first graced with Netflix's A Christmas Prince. What seemed like just another addition to the oversaturated Christmas romance movie market that takes over our televisions between Oct. and Jan. every season, A Christmas Prince became such a smash hit for the streaming platform that they even expressed concern in a viral Tweet over just how often some people were watching it. There has since been a sequel, A Christmas Prince: The Royal Wedding, and a third A Christmas Prince film is reportedly in the works.

But fans who just can't wait to get more holiday romance in their lives will be thrilled with the news that Christmas Camp, also written by A Christmas Prince screenwriter Karen Schaler, is premiering on Hallmark this holiday season... and you can watch it much sooner than you think. Bustle's got all the details below!

Schaler's story was first released as the 2018 novel, Christmas Camp (which she actually wrote after she'd completed the screenplay of the film for Hallmark) and it follows Haley Hanson, who has sacrificed her personal life to climb the corporate ladder at a prestigious advertising agency. Now she just needs to land a coveted Christmas toy company account to make partner. But her boss thinks she needs a holiday attitude adjustment first, and ships her off to a Christmas Camp at Holly Peak Inn to help her find her Christmas spirit. There, Haley meets the owner’s handsome son, Jeff, and feels an instant spark. But it's only when Haley finally lets Christmas back into her heart that they grow closer. When Jeff finds out Haley’s come up with a plan to help his father save the struggling inn he’s been trying to convince his dad to sell, their relationship takes a serious hit. Now it will take the magic of the season to bring them together.

Christmas Camp (which stars Hallmark movie veteran Bobby Campo as Jeff and Lily Anne Harrison as Haley) sounds like it was made for the network, whose brand of upbeat and emotional holiday romances have made its Countdown to Christmas programming the ultimate celebration destination. The best news? You don't have to wait until the holiday season to catch Christmas Camp on the small screen. Hallmark will be debuting the film during their special Christmas in July week, which runs June 28 through July 14. Which means you can see Christmas Camp in all its holiday glory months early, on Sun. July 11 at 9 p.m. EST.

You still have a few weeks to pick up the Christmas Camp book before you crank the air conditioner all the way up and get cozy on the couch to watch the film version this July 11. Whether you decide to read the book or watch the film first, you'll get all of the holiday spirit without any of the stress of present-wrapping, party-hopping or extended family dinners ⁠— and that is truly the gift that keeps on giving.