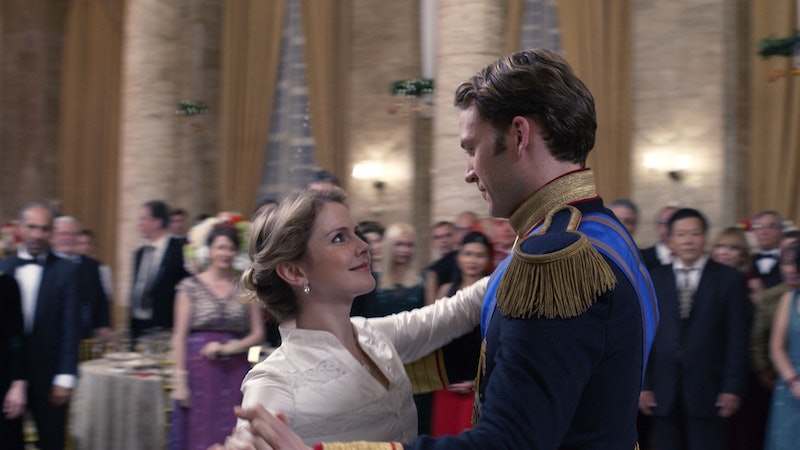 Get ready to make another magical journey to Aldovia this holiday season. According to a report from Entertainment Tonight, A Christmas Prince 3 is in the works at Netflix, and will likely arrive on the streaming service this Christmas season. (Bustle has reached out to Netflix for confirmation, but has yet to hear back.)

The report from ET stated that filming at the Romanian castle where A Christmas Prince and its sequel were filmed is reportedly set for March 11 and 12, and that the castle was being adorned with Christmas decorations despite the time of the year. The film's stars, Ben Lamb and Rose McIver, will reportedly reprise their roles as Prince Richard and the newly-crowned Princess Amber, respectively. The latter even seemed to tease the third installment in February, when she shared a photo to Instagram of herself at the airport with lots of luggage, seemingly ready for a long international trip. "KORU POINT GUARD. Summer hat. Winter jacket. Bag or nine," McIver captioned the goofy photo.

However, her costar, Theo Devaney, who plays the devious Count Simon in the holiday romances, posted an even more explicit hint at a third Christmas Prince movie on Instagram a few days ago. "Yassssss, Simon's getting a haircut.. can't wait to see your final look 😍🙈," the actor captioned a selfie while getting his hair done. Considering that a now down-on-his-luck Simon was welcomed back to the palace by King Richard in A Christmas Prince 2, it seems as if a third installment could show a brand new side of the former villain.

While no details about a potential plot have been released thus far, it's entirely possible that the Christmas Prince series will continue echoing Prince Harry and Meghan Markle's relationship. The sequel to the beloved Netflix film, titled A Christmas Prince: The Royal Wedding, was originally confirmed with a video of Richard and Amber watching the Royal Wedding back in May 2018. And considering that A Christmas Prince 2 was filled with references to Markle's transformation from American actress to the Duchess of Sussex, it doesn't seem out of the question for Richard and Amber to follow in the real royals' footsteps and welcome a baby of their own this time around.

In October of 2018, screenwriter Karen Schaler told Entertainment Tonight that her experience working as a reporter covering the Royal Family inspired Amber's story, which draws even more parallels between the Aldovian royals and the Sussexes. "[It's] loosely inspired by trying to get scoops when I was an investigative reporter and they were always sending me to get the worst story," Schaler told the outlet.

And as a former journalist, Schaler was aware of the many jokes and memes about Amber's questionable reporting skills, but they didn't bother her. "I love all the feedback. I love the ones like, ‘This is so bad it’s good and I have to watch it 20 more times.’ I was dying," she told ET ahead of the sequel's premiere. "Even the people who thought it was corny and ridiculous seemed to enjoy it and watch it. People loved picking on the poor little Christmas Prince, but all I said was, 'Thank you for watching and I appreciate it all. Keep the comments coming.'"

Rumors of a potential third Christmas Prince have been swirling since the second film premiered back in November of 2018. Considering that the most recent holiday season resulted in massive hits for Netflix — including The Holiday Calendar and The Princess Switch, which itself is rumored to be getting a sequel — it would make sense for fans to get one more trip to Aldovia. It's a holiday season must.

More like this
Here’s Everything Coming To & Leaving Netflix In February
By Jake Viswanath
'The Queen’s Gambit' Season 2 Tweet Wasn’t From Anya Taylor-Joy
By Mary Kate McGrath, Jack Irvin and Grace Wehniainen
Reese Witherspoon Confirms This Fan Favorite Will Return For 'Legally Blonde 3'
By Jake Viswanath
Alicia Silverstone Revives Her 'Clueless' Character In This Super Bowl Commercial
By Jake Viswanath
Get Even More From Bustle — Sign Up For The Newsletter
From hair trends to relationship advice, our daily newsletter has everything you need to sound like a person who’s on TikTok, even if you aren’t.